Today was incredible.  It was my first day back at Vail Mountain.  It was a powder-filled day full of parallels and nostalgia.  Sunday the 9th marks two years since my crash at Vail.  But today, in hindsight, really was my anniversary.  It was a powder filled Friday in 2005, when Fritz Hubbard and I ditched work on a house in Arrowhead to ski copious powder in Vail's backbowls.  They opened Blue Sky Basin around 10:30 and we were right there stomping out first runs, every run.  Then we started stomping out our favorite out of bounds stashes too.  On my second run out of bounds, while attempting to document the sheer beauty of being in the moment that day, I hit a tree buried under the snow and was catapulted into another tree.  Numerous broken bones in my back and more devastatingly, I would come to find out that I broke the ball of my femur off.
Fritz was my partner.  I sent him out ahead while I filmed.  There was no way for him to know that I crashed.  There was no way for him to return back up the trail.  This was a very deep snow year at Vail. (Ended up being the second biggest year in all of Vail's history.)  So the snow would have been up to his waist walking uphill.
Fritz was the last person I was skiing with that day.
Today was my first day back on the Vista Bahn.  My first day back at Vail.  It was very deep today.  Incredible Colorado powder.
Fritz was the first person I skied with today.  The circle came full circle.  With no conscious effort on a perfect powder day, we again found ourselves ditching work to ski.  Today absolutely contradicted the saying, "No Friends on a Powder Day!"  A statement I've made so many times before.
Fritz cashed in certain face shots on North Rim, to make our first run together and pick up right where things left off two seasons ago.  Instead of a riveting out of bounds extreme line, we had 10-12" on top of groomer on Northstar.  We ripped along making first tracks.  Each gliding blissfully down the mountain.  Turn after turn, snow billowing off knees, flawless purity.
My legs burning, blowing up but I couldn't stop making turns.  Giddy and teary-eyed I gave thanks for my health and incredible recovery.  Only six months ago I was still on crutches.  Snow blasting off my knees into my face and goggles...  I gasp instinctively as I choke on a mouthful of powder.  Keep mouth closed, breathe through  nose, pole, drop  knee, roll ankles:  another deep tele turn into the fluff.
At the bottom of Chair 11 we gathered.  Faces alight as only possible on a powder day.  Friends sharing an intimate ephemeral experience.
It was obvious to Fritz and I how healing that run was.  Being back on Vail with my friends Farnham and Fritzie was pretty much what it is all about.
Let it keep on dumping.  Another powder day awaits tomorrow.  This time Beaver Creek.
live, love, aloha.
-g.
Posted by -g. at 10:09 PM No comments: 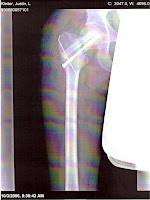 I laughed for about twenty minutes after I read this bumper sticker.  I proceeded to text it and call friends exclaiming.  I just couldn't get enough of this today.  Cheney skis in jeans.  So perfect.  Most people will probably wonder why I find this so wonderfully funny.  It just is.
So back on November 6th, when we were locked in a snowless Indian Summer, I went to visit my good friend Dr. Cynthia Kelly at the Colorado Limb Consultants down in Denver.  The purpose for the visit was to get another round of X-rays (I'm sure I glow by now.), see how the bone graft in my hip is doing, and check-up on the femoral neck fracture.
After nearly two full years, I got the clearance to go ski!  Problem...  No Snow.
Well thanks to the snow gods, snow returned to Colorado this weekend.  Heavily.
And thanks to Dr. Kelly and her team, I ripped this blessing most dutifully.
Here's a couple videos...  Not too shabby for missing nearly two full seasons on snow?
Now I must mention that getting to Wolf Creek Pass for this serious dump was no small feat.  All day Friday it was snowing off and on here in Edwards.  The "Birds of Prey" World Cup Downhill was being held in Beaver Creek just minutes away.  Skiing was in the air.  I've been so into riding my mountain bike of late, that I wasn't really worried about skiing.  The snow has been so bad that getting excited to rip man made snow was far from my mind.  But as the weather turned cold and starting
spitting snow, everyone was talking about a big dump.
I didn't really pay much mind to the talk until my boss Dave and I looked up the radar maps on www.noaa.gov  A gigantic cell had moved into Colorado and was pounding the rockies.  As we looked closer at the forecasts it became apparent that it was going to blast the San Juan's the hardest. 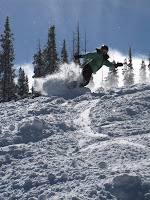 My friend Audrey and I decided spontaneously to jump in my truck and head south directly into the blizzard.  The idea of starting my season with soft, deep Wolf C
reek snow somehow made the 5-6 hour drive palatable.  "Feet.  Not inches.  Let's go!"
We made it, but it was a crazy drive requiring mental stamina and a certain amount of insanity.  We only spun off the road once on the way.  A nice 360+ across both icy lanes of the highway into the snow-filled ditch.  No harm, no foul... we were able to drive out in 4x4 LOW.  And the next hour I drove 25mph  white knuckled surfing snowy, slushy, icy roads to the base of Wolf Creek Pass.  I dropped the psi in my tires to 25 and crawled slowly to the ski area at the top of the pass.

In the center of the blizzard, we slept (more like waited with eyes closed) in the truck with our ski gear until the lifts starting turning.  28" of heavy snow had piled onto the mountain, making it skiable.  Finally.
It snowed all day Saturday, all night Saturday and in the morning on Sunday it was back to bluebird and of course "A POWDER DAY!!!"  Skiers favorite words.  And so we skied. and skied. n skied.
A total of 50" dropped on Wolf Creek from Friday 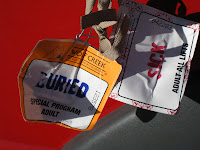