The Supreme Irony of Knowing the Future... 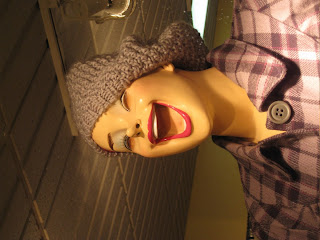 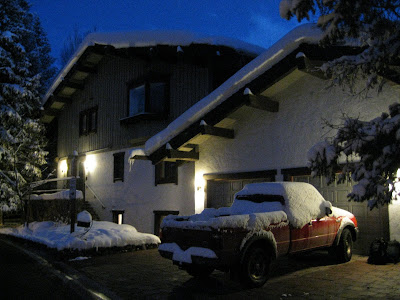 So I sit here at my desk, after another hard day of ripping the immense powderfields of Vail, trying to stay out of the living room where my roommates and friends are watching the Colts play the Chargers.  Now I've actually been learning how football works.  Funny... a year and a half of sitting on the couch will do that to a guy.  But they are watching a Tivo'd football game.  No one wanted to give up skiing.  It is a playoff game, and here's where the irony comes in, I saw on MSN that the Colts lost.  With all of them being Colts fans, hoping for another shot at the Superbowl, I can't stand to be in the room watching the recorded game knowing that the Colts are going to lose.  It is fact.  Past tense.  I know.  They don't.  Strange psychological situation, like being all knowing for a moment.  I hear them cheer when their team is doing good.  But I know in a little less than an hour they will be totally bummed out that their team has lost.  And the season for the Colts has come to an end.
Sad.
Another sad event, before I go on and on about how great the snow has been here in Colorado, the snow has also been deadly.  Two people have been killed in the East Vail Chutes in avalanches in the last two weekends.  It is really sombering to have trained and prepared skiers get caught in slides and not survive.  I think many people forget how bad the snowpack can be in the back country.  East Vail Chutes is a steep and extreme area out of bounds from the Mongolia bowl, in Vail's famous back bowl area.  It is a very popular area for extreme riding and skiing.  It is somewhat north facing depending where you drop in.  Back in October we got some snow.   It was enough to settle in to the terrain and because of limited exposure to the sun stayed there, even though we got very little precipitation for the next month or more.  So with the continued poundings of fairly dense snow, it is no surprise that things are starting to rip away.  I've seen avalanches up close.  Pretty scary stuff.  The first victim was prepared and educated and appears to simply have had his day arrive.  The second guy probably should have known that if someone died there a week before, you might not want to go ski there after another 50" has fallen on it in seven days.  Those are incredible snowfalls.  Probably seven or eight feet of snow has fallen in the East Vail area in just the last few weeks.  Sad nonetheless.  I hope everyone stays out of East Vail Chutes for the rest of the season.
On the bright side...  It has been snowing and snowing and snowing.  It was an epic week of skiing here at Vail and Beaver Creek.  Incredible days one right after another.  I think I skied eight of the last 10 days!  It has been so incredible every time.  I have been skiing very strong but my body is begging for a rest.  Good thing I have to work tomorrow.
Here are some pictures to drool over.  Hope the new year is treating everyone as good as it is me.
Oh yeah and BIGUP to Farnham, Will, and Fritzie down in Jamaica!  Livin' it up on the beach for the rest of us.  One Love Fellas.
live love
-g.
Posted by -g. at 4:16 PM

what kind of shit is this? I´m supposed to drool over a house and some weird puppet thing? Give me the goods G!

Yeah fair enough. I struggled with my computer and blogger for over an hour trying to get the damn photos to upload. Sorry.

You are exactly the man I was looking for too. I wish I could just call you up. So how do you put photos in various places in your post instead of just at the top?

Hook me up on the nuances of this program.
Thanks.

Yeah fair enough. I struggled with my computer and blogger for over an hour trying to get the damn photos to upload. Sorry.

You are exactly the man I was looking for too. I wish I could just call you up. So how do you put photos in various places in your post instead of just at the top?

Hook me up on the nuances of this program.
Thanks.

G? Are you still around? Just stalking you, as usual. Email me sometime.