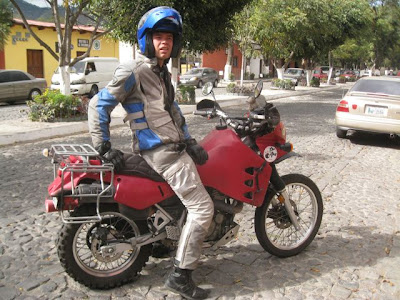 It was a great surprise to run into Torben, a KLR rider that I had met back in San Cristobal de Las Casas, Chiapas, Mexico.  He was staying at the hostel that I had checked into and wandered up while I was hacking away on my laptop.  I was so excited to see him because when I saw him last he was posted up in San Cris waiting for his bike to get fixed.  We went out to dinner with he and his girlfriend and discussed how all the moto guys we'd been running into seemed to be congregating on Antigua for New Year's Eve.  I decided I would go there as well.

The next day we didn't get out of town until 2:30 in the afternoon.  I was stressing a bit because we were all going to be showing up in Antigua near dark on New Year's Eve with no place lined up to stay.  Rumor had it that Antigua was already packed with tourists, both foreign and Guatemalan alike.  We blasted up the highway out of Quetzaltenango or Xela as it is called for short.  We headed along the Pan American highway climbing higher and higher into the mountains.  The pavement was brand new and hadn't even been striped in many places.  The views were incredible but we were racing against the sun, again, and so photography wasn't really an option.  The KTM was running wonderfully up in the cool thin air.  And the fresh pavement was a welcome treat after the punishing ride from Coban the day before.  Volcanoes silhouetted in the distance and clouds gathering in the nooks and crannies created by the extreme elevation differences between valley floor and ridgetop.  The pavement twisted and wrapped and dropped and climbed.  It was an utterly fantastic ribbon of asphalt.  Children lined the road waving to us.  I was in total awe.  I thought that they were just super happy to see us riding by, but when I saw a handful of candy get tossed out of a passing car, I realized they were waving to the holiday passers by, who would throw them holiday treats.

The descent from the ridge down to Antigua was precipitous and quick.  We rolled in right at sunset and were treated to cobblestone and colonial color.  It only took a bit of picking around until I decided to check email and see how Ben and Charles had managed coming down from Semuc Champey.  Turns out Ben had just sent me an email and he had a great little hostel lined up with parking for all the bikes in the courtyard. 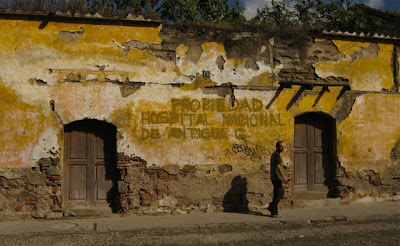 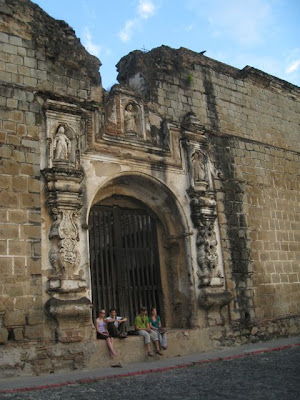 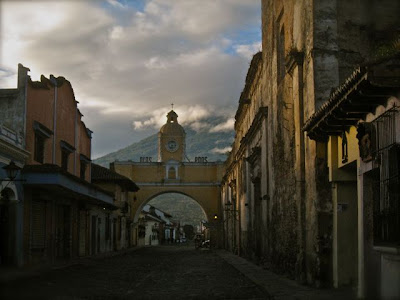 We showered and exchanged stories from our trip down from El Remate.  I met Charles, Ben's riding partner that was racing through Mexico while Ben and I relaxed at the lake outside Tikal.  Charles was riding a KTM 640 Adventure.  Finally, I wasn't the only KTM'er in the crowd.  But everybody else was riding trusty KLR's which seem to be the bike of choice for the ride down.
We headed out into the chaos to start our New Year's celebrations.  First things first.  Street food.  Ben and I had become big fans of finding the cheapest and best eats in each town we visited.  So far it seemed that the best option was always street food. 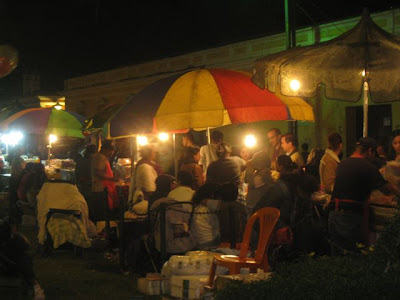 Torben met up with us again and tried his best to show us the way... 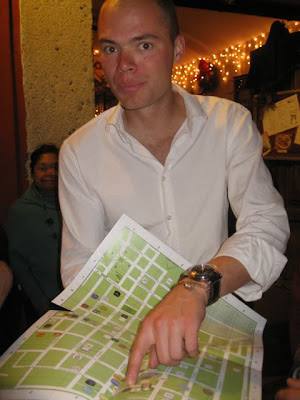 You can see how excited he is that we were paying real close attention to his directions.  But when we got back out on the street things had changed.  Dinner had let out and the partying began. 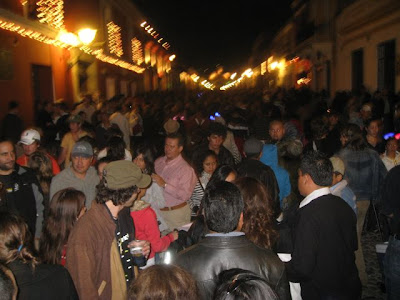 We bumbled about in the streets, beers in hand, full bellies from tasty tacos with melted cheese smeared on the thick Guatemalan style tortillas.  Oh chicken, beef, chicken and beef.  Super full but always room for the Rooster.  Gallo, or Rooster, was the beer of Guatemala.  And that night, there was nary a moment that I didn't have one in hand.
We ended up right in the right spot for the midnight bells ringing in 2010! 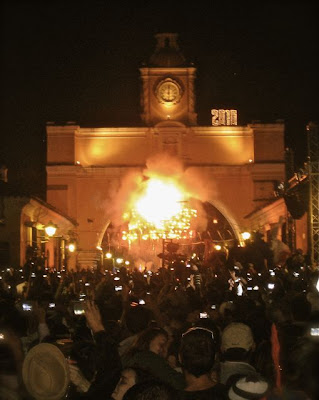 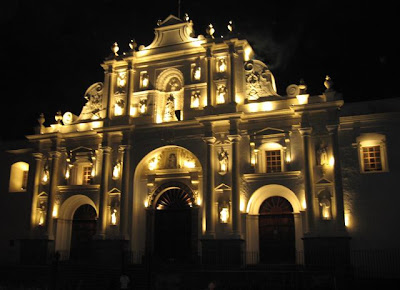 Antigua is a beautiful colonial city.  The next day the streets were empty but still full of the refuse created by thousands of people celebrating.  Scraps of tissue and exploded fireworks tumbled along the cobblestone.  But by the time we were finished eating breakfast the city workers were coming along sweeping the cobblestones clean, by hand.
A quick tour of the streets in the beautiful sunlight of January 1, 2010... 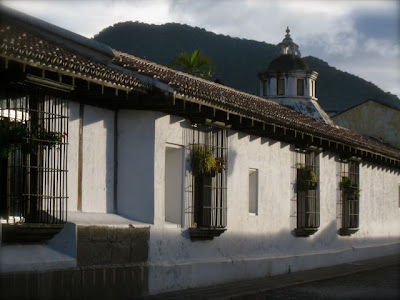 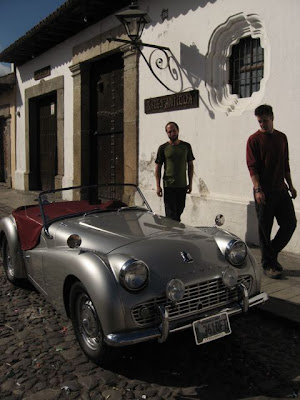 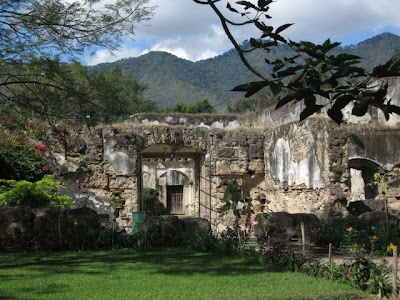 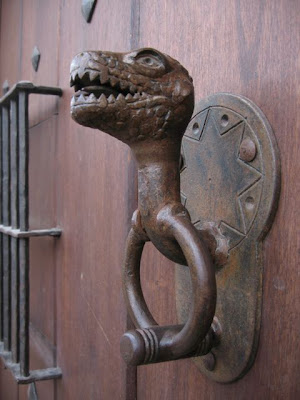 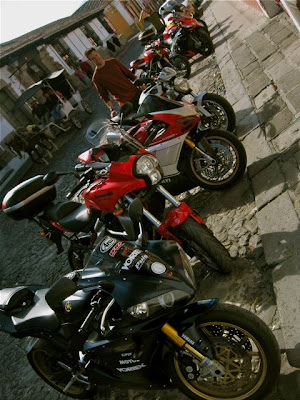 Then it was off to Pacaya Volcano for an afternoon of hiking an active volcano in search of live lava.  I wasn't sure how my hip would hold up to the hike but the lure of lava was sufficient to make me give it a go.
Ben has a great write up at www.afewmoremiles.com that I'm stealing and posting here...
In the afternoon we decide on a tour up the Volcano Pacaya. there are 37 volcano’s in Guatemala buy only 3 of them are active. Pacaya is active. Before we could even step out of the van, dozens of kids come running up to us. Buy schtick! Buy schtick! They cost only Q5 ($0.75) but we’ll do without.

We’re not quite sure what  to expect but it turns out to be quite a good trek up the scree slope. The initial views of the valley are outstanding.

With strong winds and rain working in we ascend into the clouds and eventually arrive at the lava. INCREDIBLE! The heat is so strong. Liquid hot magma is flowing under our feet and spewing out from the ground right in front of us. It’s also quite eerie and I wonder if the ground is going to give way or if my shoes are going to melt. I couldn’t get any closer than he photo below because the heat was so strong.

This is what the ground looks like under my feet.

Up on a precarious rock pile there was a woman taking pictures. All of a sudden the rock pile began to crumble and she went tumbling down the rock towards the lava. She fell inches from the Lava! Fortunately, Justin was only a few feet away. Without hesitation he grabbed her sweatshirt and yanked her away – effectively saving her life.

It was a scary reminder that this wasn’t a USA style tour. Never in the States could you walk right up next to the lava. No guardrails, no signs, no paths – just go wherever you want. It’s amazing freedom but people can get hurt, or worse, die. It reminds me of an article I listened to on This American Life about college binge drinking. Say for example, if a student dies one year then everyone at the school realizes that it’s real and could happen to them. But unfortunately, that death has no effect on the next year’s incoming freshmen and they don’t take any caution in their actions. Everyone at the volcano that afternoon was sure to be more cautious. But all is forgotten the next morning when a whole new bunch of tourists make their way up the volcano…
Anyways, we headed down the mountain in the dark. We’re all freezing cold in the wind and rain and can’t understand why our tour guide is taking us on a different, longer, and more difficult path down the slope. Finally we make it to the combi van and head back to the city. But what trip would be complete without one of the girls getting sick and throwing up out the window 3 times! We get back to Antigua and pass out, exhausted.
Early the next morning we set off for the El Salvador border. Working our way out of town we roll the wrong way down a one way street. The police aren’t happy but I tell them we’re going to Argentina and they just tell us not to do it again. Yes, sir. I’ve learned my lesson… 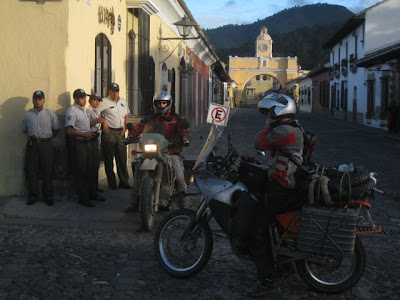 Here are my shots from the same day on Pacaya... 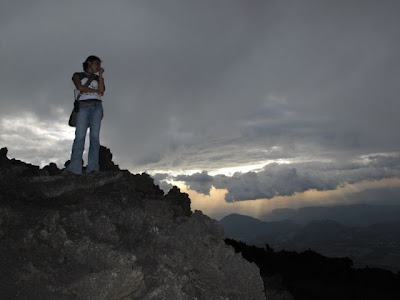 This is our guide... Panteras unite! 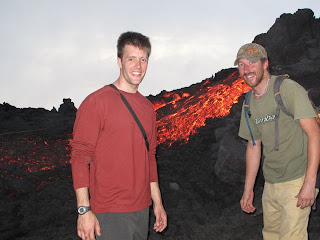 Pretty excited to be this close to lava flowing fresh from the source.  Charles and I sweating here even 10 feet away from the flow. 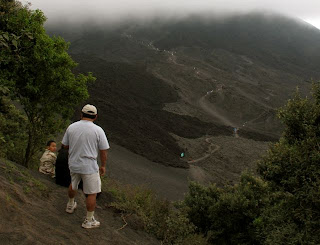 The line of tourists trekking across the lava field.  The gray stuff is old.  The black stuff is from the last major eruption a couple of years ago. 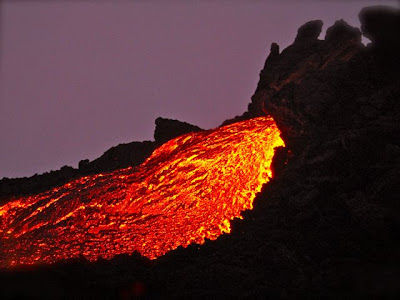 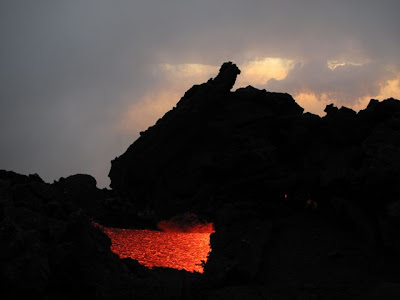 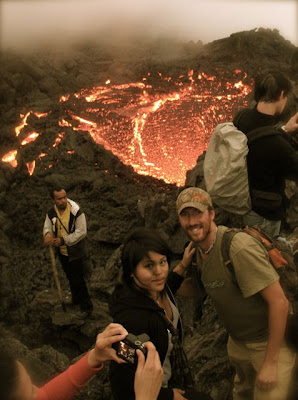 And a token photo of me and Melinda, the girl I pulled from certain death...  or too close for anyone's comfort.  See Ben's write up above.  I was standing about where the guy behind us is and Melinda tumbled down some rocks and landed right next to the live lava behind the guy.  With a lucky and quick reaction I managed to yank her to safety and onto her feet.  The strength under adrenaline thing is for real.  It was an instant reaction.  One of two in that situation... have a heart attack or do something.  I managed to grab hold of her sweatshirt and rip her up to her feet.  I pulled so hard I ripped her sweatshirt a little.  She was still pretty shook up at this point.  But on the suggestion of another member of our group, we took time to pose in front of her close call.
The next day, more KLR riders pulled into our little hostel.  Enter Mark and Jon... Firefighters from Idaho.  And soon my next posse.  But first I needed to get some new rubber on my bike.  I'd been hauling this tire on the back of my bike since Arizona and of course just rode the harshest roads to date on the bald one.  The guys convinced me that I'd gotten the life out of my Dunlop Rally Raid.  What do you think?

Around 8500 miles.  Not too bad.  I think I could have pushed it a few more, but we had the perfect workspace to make the swap. 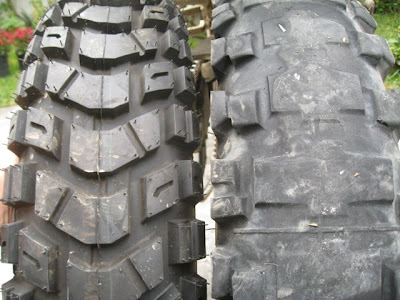 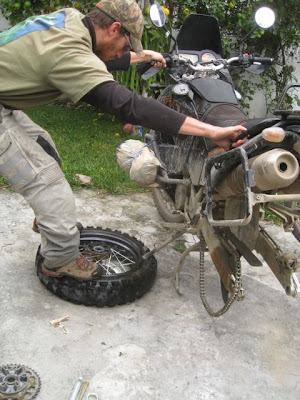 You still had plenty of tread left on that tire...