My bike had been performing wonderfully but I could tell that my clutch was wearing.  During high speed passes, I was really lacking the snap that I'd grown used to.  It wasn't slipping entirely, but I knew that it wouldn't be long.  My bike had surpassed the 30,000 mile mark so it wasn't too surprising that the clutch would be wearing out.  With a little research and a recommendation from Al VanDyke, who I'd ridden Baja with months before, I was able to locate a shop just outside of San Jose.  I left Arenal on a bright sunny day and really enjoyed the narrow country roads heading south in the middle of Costa Rica. 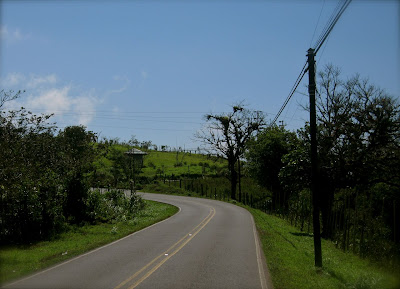 The views were exceptional and the weather was perfect.  Unfortunately with no shoulders on the roads stopping to take pictures was difficult.  I only managed to get a couple of shots on my way to San Jose. 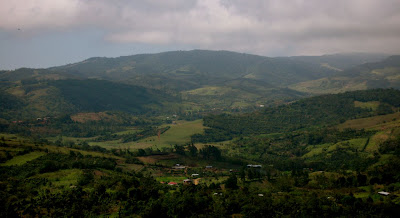 I made the mistake of looking up Breyman Motor Sports KTM on Google Maps.  I found it and thought that I had a great idea of where it was located.  I followed the directions that I'd jotted down and found a day parking lot where the shop was supposed to be located.  After circling the block numerous times in busy city traffic with my KTM almost overheating, I finally stopped and asked the parking lot attendant for help.  He called the number I'd written down on my map.  Turns out Google Maps had pulled up a mailing address.  The shop was actually located 20 minutes out of the city in the suburb of Santa Ana.  With proper directions I found myself there shortly.  The next hurdle was that I was going to need to leave my bike there to get worked on and the closest hostels were back in the downtown area.  Unfortunately all of the hotels in Santa Ana catered to business travelers and were well over $100 per night.  This was going to blow my budget severely which had me in a bit of a funk. 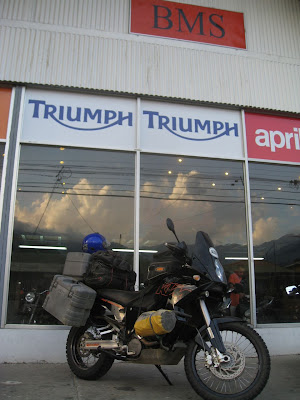 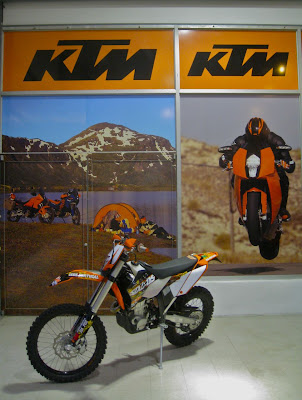 The owner Herbert von Breymann arrived shortly after I had.  He knew who I was from my emails inquiring about service.  Fortunately he picked up on the financial situation I was in and totally saved the day.  He not only offered the use of the motorcycle delivery van as accommodations but told me that I'd be able to work with the mechanics to save some money on the repairs of my bike.  I was stoked.  My mood turned around immediately and I was really fired up to get to sleep in the motocross van.  Not only would this save me hundreds but it made for a great story much more fitting to the theme of this journey. 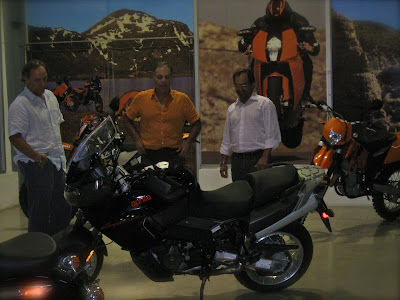 Herbert showing off the new Aprilia Caponord to some prospective buyers. My home for two nights in Santa Ana. 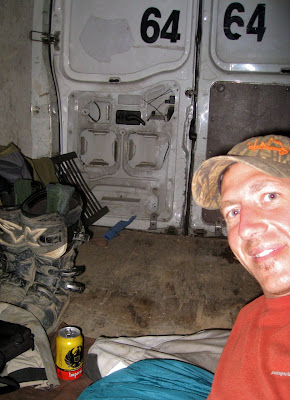 I was given a key to the front gate and they turned the van around to give me privacy from the street and a nice view overlooking the Santa Ana nightscape. 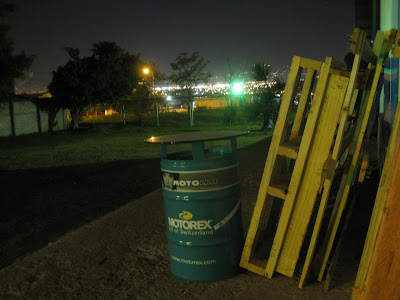 I found a little Chinese restaurant around the corner that had giant homemade shrimp wontons.  Which I ended up eating every night while I stayed. I passed my time drinking beer and working on my journaling in the back of the van.  The temps were ideal so sleeping was really comfortable.  Everyone at the shop thought I was hilarious for camping out in the van.  I laughed along with them at the thought of what a low budget bum I was being.  But with months and tons of miles ahead, I was forced to be diligent with my budget and expensive hotels just weren't an option.  Plus I had everything I needed.  (On the second night I found out that if I sat on the loading dock, I could even get wireless internet.)
Bright and early the next morning I awoke to the traffic of the busy street, unloaded my gear from the truck and started disassembling my bike to be ready when the mechanics showed up to start their day.  Denis, the head mechanic, arrived and showed me a good spot on the loading dock to put my bike.  I figured that I would removed the engine guards and gas tanks and he would take it from there.  Instead he gave me instructions in Spanish and I did the work. 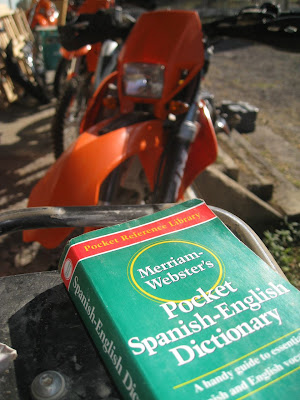 When I got the clutch cover removed, Denis noticed a white film that was covering the inside of the cover.  This was an indication that my water pump seal was leaking water into my oil.  This is a common problem with KTM LC8 motors and fortunately I was carrying the parts to make this repair.  It was amazing that I had gotten here to the shop without overheating the motor.  Only a day or two more riding with the bad seal and I could have found myself broken down on the side of the road. 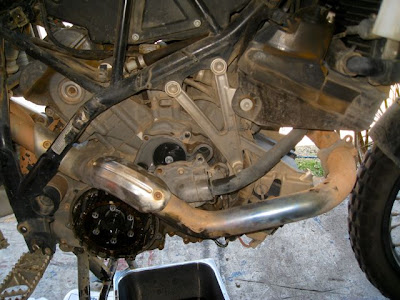 Here the clutch and the water pump are opened up. 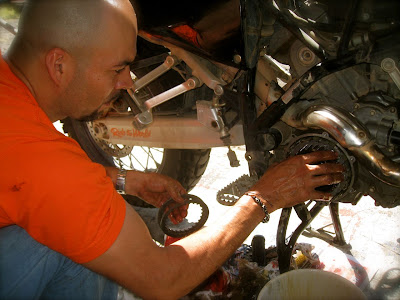 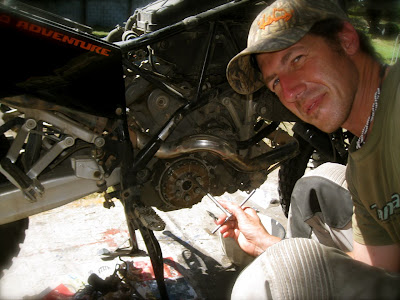 Posing for a self portrait tightening the pressure plate bolts.
On Day 1 we replaced the friction plates and the water pump seal.  I would have been set to ride out this evening but as it was getting late and had the option to spend another night in the van, I decided to stay.  On Day 2, I replaced the spark plugs, cleaned my air prefilter and inspected the main filter, did a complete coolant flush and replacement, and a complete oil and filter change. 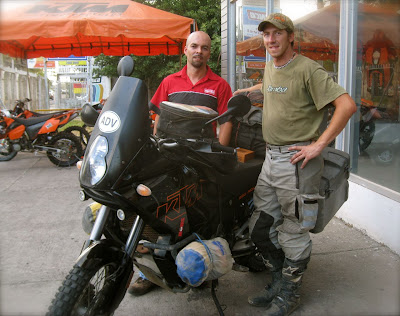 Denis had the young shop hands give my bike a complete and thorough washing and waxing while I got my things organized to hit the road.  Herbert gave me a great route to ride through the mountains near Puriscal and also totally hooked me up on the parts costs and labor rates.  BMS is the best shop I could have hoped to find to get me back together and running.  The staff was top notch helping me with everything.  Kenneth, the do everything sales guy, even bought me lunch!  A huge thanks goes out to everyone that helped me out.  I didn't have much but I had a box of cigars from Nicaragua.  I brought one up to José the parts guy, Martin the salesman, Daniel the junior mechanic, Giovanni the delivery guy, of course Denis the master mechanic and I was lucky to be able to thank Herbert in person just before I left.  I can't say enough how awesome these guys treated me.  I felt like I was part of the BMS family and it was hard to leave them all.  Thanks guys! 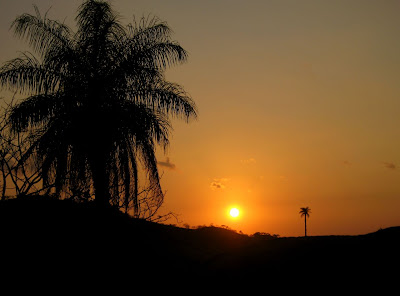 The ride to Jacó was excellent and Herbert had picked a perfect twisty road for me to break in my fresh clutch.  I ripped through the twisties loving every corner.  The road took me high up into the mountains with great views before dropping continuously down to the little surf town.  I pulled in just after dark to Hotel Kangaroo and was stoked to find another bike there too. 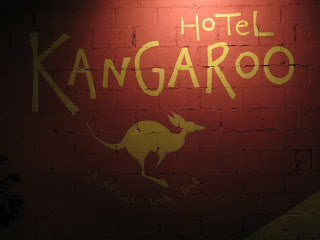 The hotel wasn't much to speak of but at $12 the price was right and I ended up meeting Bridger, who is riding a KLR from the states down to Argentina.  We had fun hanging out and partying together in the bustling little psuedo Miami surf town.  The hotel owner was a drunkard and displayed some pretty nasty business skills.  I'll save the details but let's just say I'd be surprised if he's running the place much longer.
We all got some good laughs at his expense though. 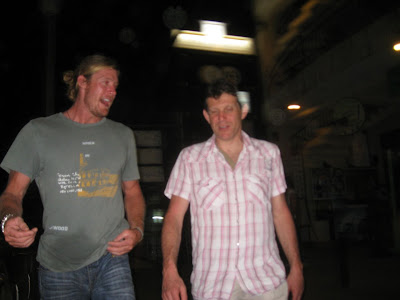 I spent much of my time chilling at a little beachside restaurant owned by a woman from Argentina.  They had good wireless and tasty coffee.  I met Martin, the woman's brother, who was visiting from Buenos Aires.  He is a motorcycle fanatic as well and we spent lots of time chatting.  If I ever make it all the way to Buenos Aires, I can't wait to meet up with him and check out his vintage BMW. 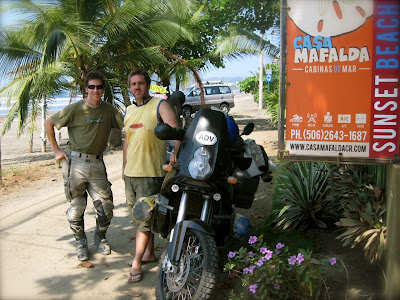 I stayed in Jacó for a couple of days before pushing on to Dominical.  I met a local girl named Nathalie, who had studied in Colombia and was really excited about my trip.  She was staying at Casa Mafalda and saw my bike while I was there working on the internet and chatting with Martin.
We exchanged emails hoping to catch up again later... 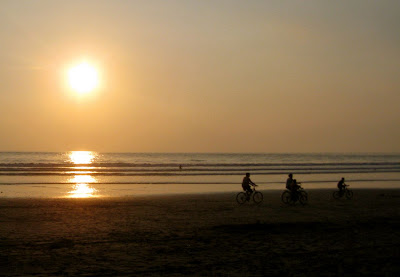 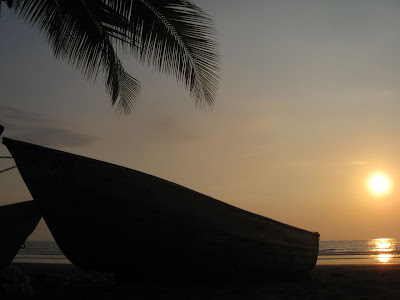 When I got to the little hippy surf hangout of Dominical, I was super surprised with instantly how chill it was.  The drive down the coast was pretty mellow.  Lots of coconut palm plantations and really nice road.  The new paved highway past Quepos was nearly finished so getting to Dominical was really a breeze.  I pulled up to the beach after a couple of hours in the saddle and chilled in the shade drinking fresh cold coconut water from a coconut that was hacked open just for me for the bargain price of 50 cents. 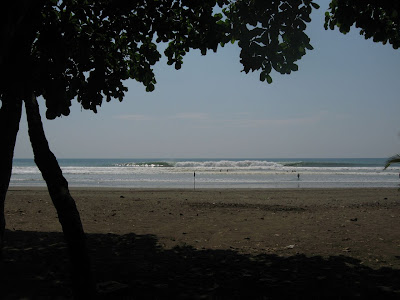 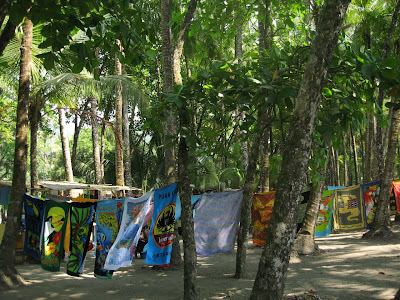 As I was sitting there surrounded by sarongs for sale swaying in the breeze, I saw a guy coming up looking closely at my bike.  He couldn't see me yet and I was preparing to tell my story yet again when I hear him exclaim, "No F'in Way!"
I turned and was shocked to see Curt from Vail, that I'd met back in Sayulita, Mexico.  We couldn't get over the fact that we'd just run into each other again.  He was down for another short vacation and as luck would have it here we were.  It was way too crazy for either of us to wrap our heads around so we went straight to the bar, got some ice cold beers and reveled in the coincidences that had evolved to leave us sitting here sharing beers in Dominical, Costa Rica.
We spent the rest of the afternoon sitting in the open air bar of Tortilla Flats drinking like good ole Colorado boys should.  Too funny...  I never met Curt in Vail when we live less than 5 miles apart but now I've met him by accident twice on this journey.  Uncanny.  Super fun. 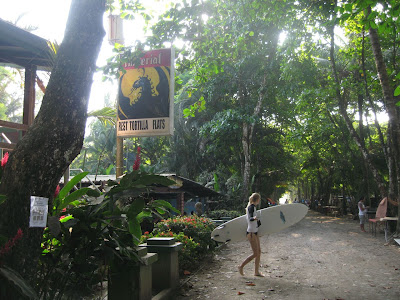 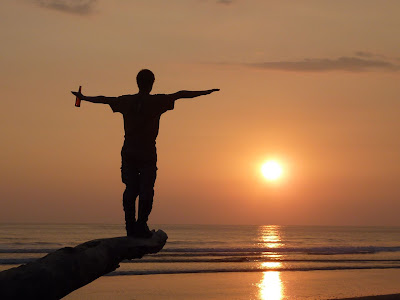 Thats too funny. I saw you posing for this picture while drinking an Imperial on Dominical beach.

I lived in Playa Hermosa next to Jaco. Your post sent me down Memory Lane. Keep up the good work. Rubber side down...

i really adore your posting kind, very exciting.
don't give up as well as keep writing due to the fact it simply well worth to read it.
looking forward to read more and more of your own stories, cheers ;)

An exotic resort on the beach with a full view of the sunset and sunrise will be an ideal beach vacation. There also really affordable cottages with good amenities for the entire family.