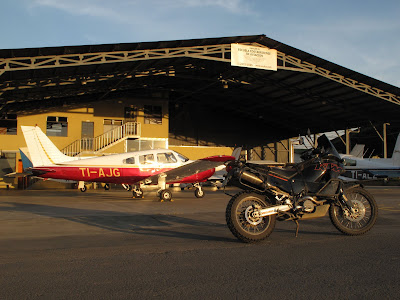 I left Costa Rica on a Monday morning.  The weather echoed my mood.  It was cloudy, overcast and lightly raining.  I made my way from Tres Rios out towards the town of Turrialba.  It was a downhill ride the whole way.  My thoughts were heavy and stuck on the fun days I was leaving.  My mind was questioning leaving Nathalie and her family.  But I knew I had to move on.  Sam and Daniel had gotten ahead of me while I was enjoying the election day scene at the local tavern in Tres Rios.

I raced down into Turrialba feeling the warmer air through the opening in my helmet.  The light rain continued to come down.  I pushed through the little town finding the road out past the botanical gardens.  The vegetation got thicker.  The leaves were getting bigger and the plants were turning more jungly.  Once I crossed the river the road started climbing towards Pavones.  The road was typically narrow.  I rode to the summit of the pass and started descending again towards Siquirres.  As I came up on a slow moving truck in one of several switchbacks, I decided to pass it on the inside of the corner.  This turned out to be the biggest mistake yet.

A semi was coming up the pass full speed pulling an empty trailer.  Just as I got alongside the pickup, I met the oncoming semi.  I quickly swerved missing the front bumper of the semi by inches.  The semi trailer swept past me and the next thing I knew I was on the ground sliding across the pavement.  I held on to the handlebars instinctively sliding in a slow rotation on the ground.  When I came to a stop, I jumped up full of adrenaline and picked up my huge bike while the lady in the truck was yelling at me from her window.  She was panicking and yelling in Spanish that it wasn't her fault.  I told her that I knew that.  As best I could I yelled to her that everything was fine and that it was all my fault.  I got the bike to the side of the road as another semi blew past me at full speed.  I reattached my gear bag to my engine guard and did a quick assessment of damage on myself and the bike.  Fortunately, no miraculously, I had suffered zero injuries and my bike only scratches and a broken front blinker.  I didn't know what to do.  The lady in the pickup truck had driven away and I was there on the side of the road shaking a bit.  But the only thing there was to do was get back on and keep riding towards Puerto Viejo. 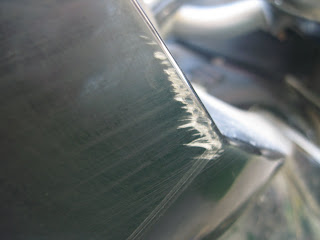 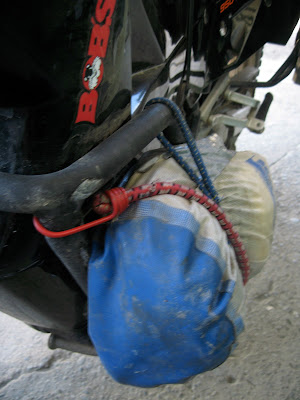 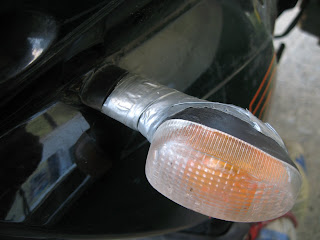 I found the road to Limon when I got to Siquirres and a couple of hours later I was pulling into Rockin' J's Hostal and Campground in Puerto Viejo.  I had replayed the accident in my mind over and over again  during those couple of hours of riding.  I couldn't believe that it had all happened really.  But the blinker swinging by its wires on the front of my bike was testament that it had really all transpired after all.

When I pulled up to the hostal, Sam was sitting in the restaurant and came out to greet me.  I told him what had gone down and we looked over the bike and my riding gear checking for further damage.  He brought me an ice cold Pilsen beer and we had a quick 'cheers' to my good fortune.  What a day!

My riding gear had functioned perfectly and I was stoked that I was wearing my motocross boots and all of my gear.  Here are a couple pictures of the minimal damage that my riding jacket took in the crash. 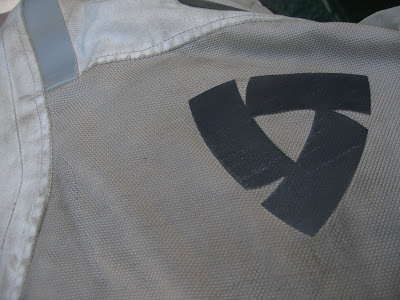 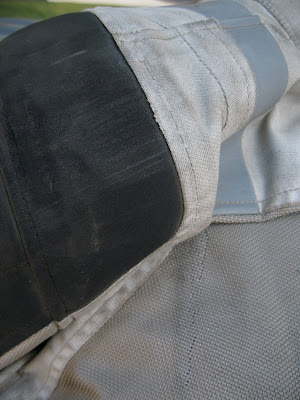 I found out the next day that the plane I'd photographed Gigante in front of back in San Jose had a crash landing the very same day as my crash.  Crazy coincidence.

I spent the evening chatting with other motorcyclists while a poker game went on late into the night.  I finally was wound down enough to get some sleep around 3:30 in the morning.  Thinking that we were going to spend one more night in Puerto Viejo, I wasn't really worried about getting to be so late.  Seemingly moments after I put my head down in my tent, Dan was calling my name waking me.  It was six in the morning and he said that we were going to head for the border.  He and Sam had changed their minds while they were out partying and decided we'd make an early push.  We were loaded up and riding out of Puerto Viejo by 7:30 am riding through early morning sunlight and banana fields. 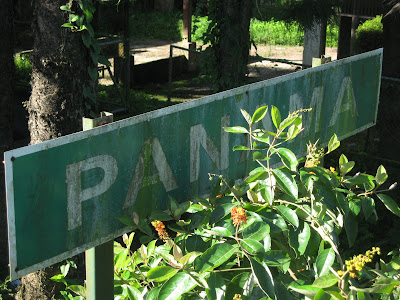