Colombia : In Search of Juan Valdez... 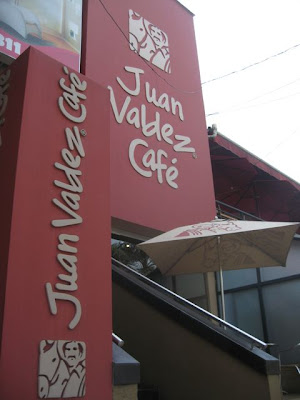 Ever since I was a kid, Colombia has been synonymous with Coffee:  big tin cans of ground coffee at my grandparents house.  And for as long as I can remember the image that joined these coffee memories was Juan Valdez with his trusty burro.  I found him in Medellin.  His image adorning the front of the coffee shop chain that resembled Starbucks in just about every way.  Hipsters sipping away on super brew while hacking away on laptops enjoying free wifi with their caffeine boost.  But as I rallied out of Medellin, solo for the first time in months, I was in search of a different Juan Valdez.  One that looked more like this... 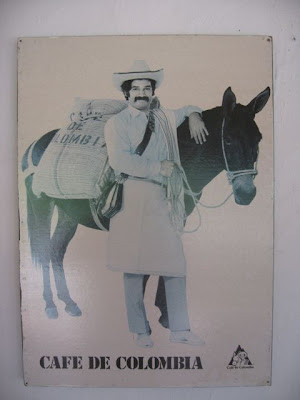 And what better place to search him out than the coffee growing countryside of Colombia south of the Medellin valley known as the 'Eje Cafetera' or 'Coffee Axle'.
I was excited to be hitting the road solo again.  Butterflies swooped and swarmed in my belly as I rode down the highway headed out of the city.  I climbed up out of the Medellin valley and crossed over a nice ridge where the road began its descent again.  The countryside was beautiful and the weather was warm and wonderful.  About two hours into my journey, I was starting to get hungry.  I passed through a little town named La Pintada, crossed the river and moments later saw eight big motos lined up at a roadside restaurant.  Perfect.  I pulled my bike up alongside the others and sat down at the open air grill for a bite to eat hoping for some conversation with the other riders.  I had no idea how much this decision would change the next few days of my ride. 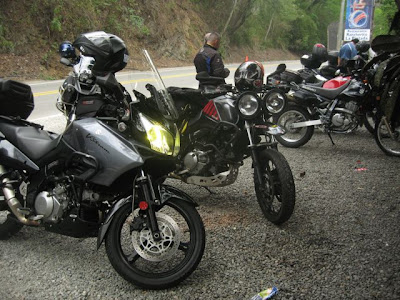 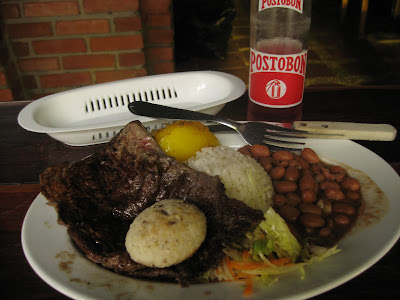 As I was eating this tasty meal on my own, I saw the group of riders start loading up.  The last of the riders to pass by me introduced himself as Daniel Fernandez.  We started chatting about where they were heading in such a big group.  Daniel explained that he was the owner of the Suzuki Superstore Medellin and his group was heading to Santa Rosa for a long weekend of riding through coffee country.  I was wrapping up my tasty steak lunch as we talked.  His group peeled off one by one ripping down the highway.  Daniel was strapping on his gear and said that if I wasn't on a specific itinerary, I would be more than welcome to join them.
I was super excited to be riding solo again.  Exactly for this reason.  With no one to consult, the obvious answer was to jump on board with this posse of Colombian riders.  I wolfed down my final bites, paid my bill, and grabbed my helmet excited to ride with a pack of locals.
Next thing I knew, I was racing behind Daniel trying to keep up with his strange looking Suzuki DL650.  We raced along the river cruising on the fairly flat and only slightly curving road.  After about a half hour we came up to the rest of the group waiting alongside a gas station.  Everyone had their helmets off and were chatting when we pulled up.  I saw a couple funny looks as Daniel explained that I was going to be tagging along.  But soon they all came over and we had a quick group introduction before saddling up for the last 20 minute stretch into the hamlet of Santa Rosa. 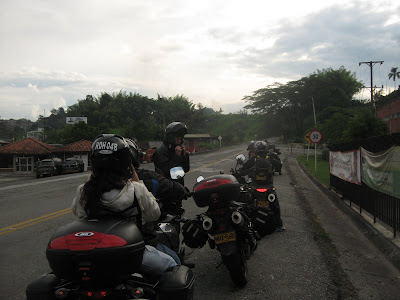 Daniel had explained that they'd rented out a hospedaje on a finca, or coffee plantation.  "What better place to continue my search for Juan," I thought.
We rode through town and then started heading out towards the famous hot springs.  A couple of kilometers down the road we came to the hospedaje.  The owner opened the gate and we pulled in one by one, eight bikes in total.  That evening was incredible.  The rum came out, the tequila came out and soon we were all sitting around drinking and sharing stories.  The guys helped me out by speaking slowly but the majority of the night was in Spanish.  It was really cool.  One guy named Paul was from England and had been living in Colombia for the last ten years.  He was the chef for the night and I helped him for a while in the kitchen. 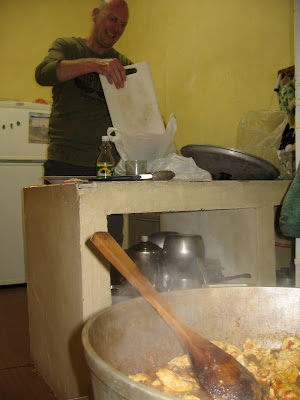 At one point, with a good buzz coming on, I couldn’t help feeling like I was in a scene from Motorcycle Diaries, while Daniel was telling a story in exaggerated Spanish and everyone watched and listened intently, laughing with mad intensity when the story reached its crescendo with Daniel up out of his seat gesticulating wildly.  It was so awesome to be part of such a great group of Colombians and being treated as one of them. 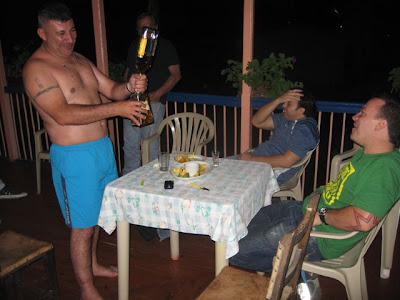 The next day I awoke to an amazing view of the surrounding countryside. 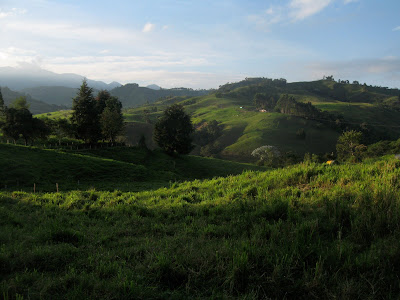 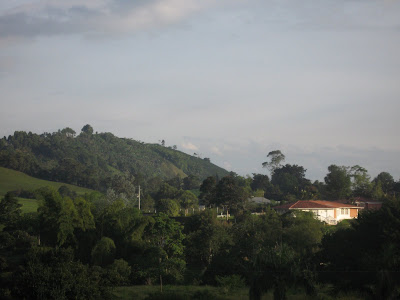 We got up early and unloaded the equipment from our bikes while we waited for breakfast.  After eating huevos pericos with tasty arepas and fresh cheese and home made mora marmelade, we got on the bikes for an all day tour of the back roads running through coffee country.  It was a fantastic day of riding and socializing.  We covered a lot of really awesome ground, stopping in the little coffee towns and making a scene with all of our big bikes. 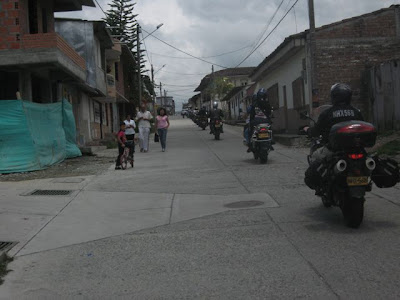 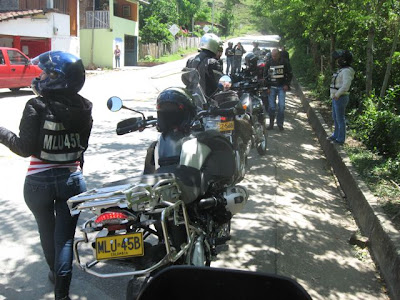 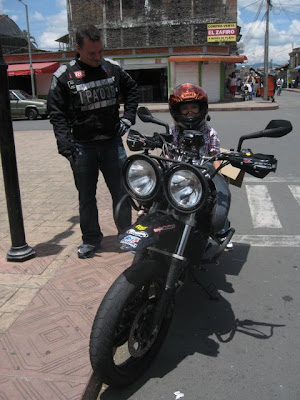 I spent a lot of time hanging out with Daniel and came to find out that he'd become a bit of a motorcycle celebrity.  Other than owning the biggest Suzuki dealership in Colombia, he'd just finished an amazing 40 day solo adventure moto journey through his country.
We kept ripping through coffee country for the day winding through the little villages surrounding Armenia, Pereira, and Salento. 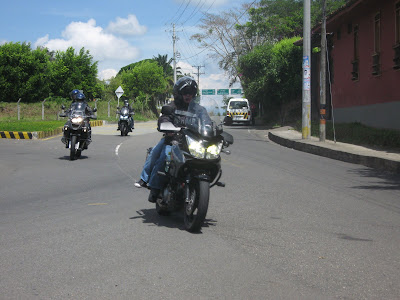 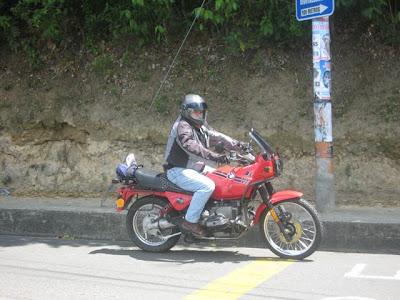 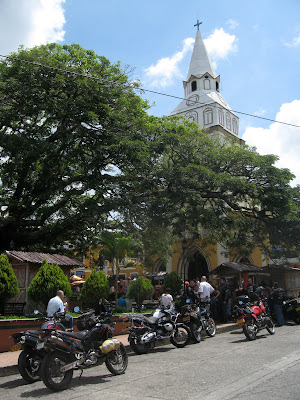 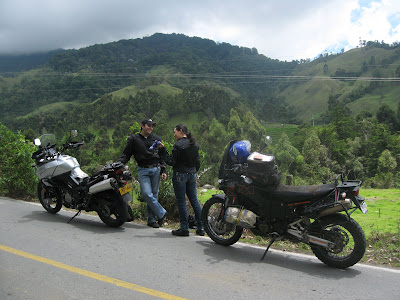 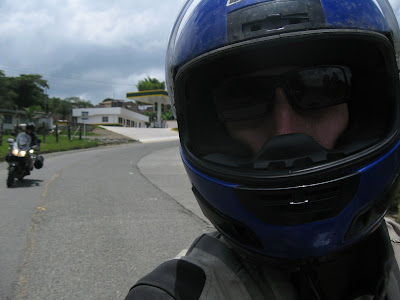 We rode to the Valle de Corcora for a tasty trout lunch and some spectacular scenery. 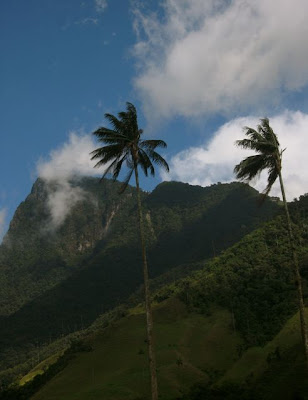 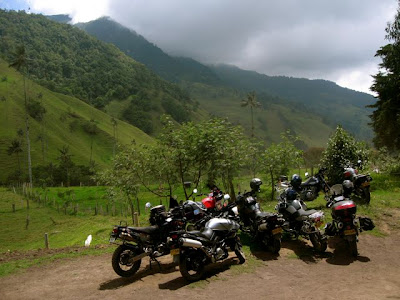 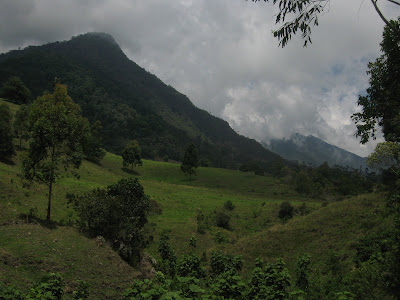 I didn't find Juan Valdez but when we returned to the hospedaje, I did find these relic posters, which made me feel that I was getting closer to his haunt. 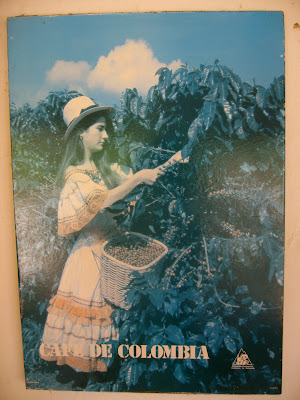 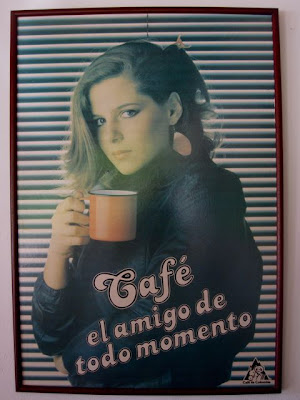 And the sight of this coffee maker was just one more clue that Juan must be close... 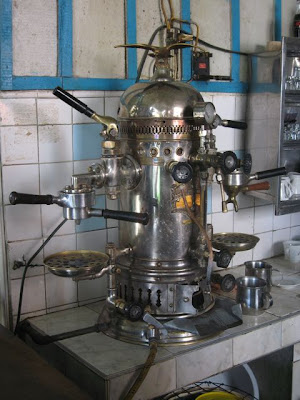 It was a big day of riding and what better way to wind down than some beers and chorizo sausages from Don Chorizo. 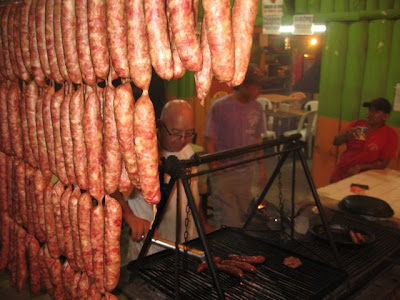 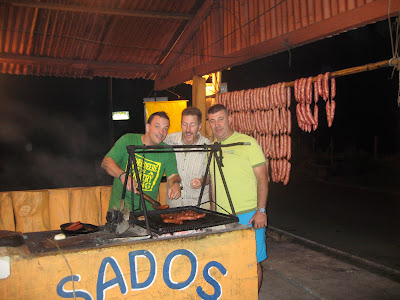 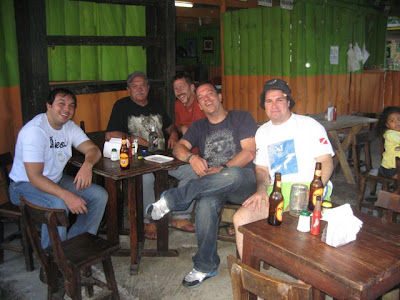 After gorging ourselves on sausages and beer we headed to the famous Santa Rosa hot springs for some soakin' to finish off an already perfect day. 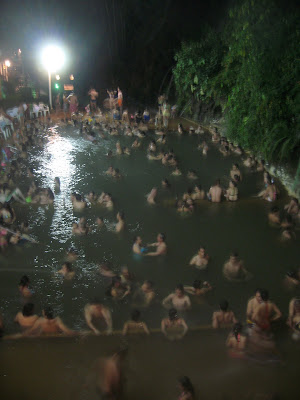 I never found Juan Valdez but there's lots more coffee country exploring to come...  A big thanks to Daniel Fernandez and company for scooping me up and showing me such a great time!

Some guys already did this. They made a documentary called In Search of Juan Valdez. Give credit where credit is due.