"Chasing Tornados with a Pinwheel" 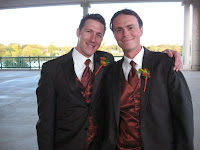 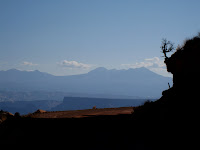 Sorry I disappeared.
Life got pretty crazy after returning to Colorado.  Fairly crazy to return after 5 weeks of traveling and freedom... to responsibilities at work, needing to find a new place to live, entertaining visiting relatives, and preparing for my best friend Ryan Johnson's bachelor party and wedding.  Run-on sentence... yeah.  This is exactly how I felt for the month of September.  Just like I was living inside of a horribly long run-on sentence.
The wedding was stellar.  I've been to a lot of weddings.  This one was truly special.  Ryan and Monica pulled off a momentous occasion with style and grace.  An autumn event in St. Paul, Minnesota, the ceremony was held at the Como Pavilion.  During the rehearsal, a light rain came down on the lake as wind kicked up golden leaves on the lawn.  A cool breeze sent shivers as we practiced our duties.  Just as things were commencing, the evening sun broke through the clouds sending golden rays east.  Heaven and Earth intertwined.  For many minutes a double rainbow shone proudly over Como lake just behind us.  Clearly a sign of creation's approval.
Upon return to Colorado's Denver International Airport, I breezed through with Steve and Michelle Pennisi to their home in Dillon.  I spent the night excited to head to the Vail Valley in the morning and commence moving into my newly found residence.  Fate had other things in mind...
At 7:50 a.m., October 1st, just over Vail Pass on Westbound I-70, I rear-ended a woman and daughter from Grand Junction after the mother slammed on her brakes in response to the drivers in front of her.  With a semi to my right and the concrete median to my left, I had few choices.  I managed to get my truck from 65 mph down to 40 mph before finally smashing my truck under her rear bumper.  My truck was badly damaged and needed to be towed to the repair shop.  Fortunately no one was injured and the whole thing got chalked up to inconvenience.  So once again, I needed to rely on my awesome friends to get me moved in.  Again.
October blew by with fits and starts of winter and then a solid couple of weeks of Indian Summer that carried right on into November.  I spent this time riding my mountain bike as much as possible.  My hip continuing to feel stronger and stronger every day.  I went to the desert in western Colorado and southeastern Utah nearly every weekend.   I attempted a 3 day mountain bike trek through Canyonlands National Park with the St. Johns.  Unfortunately after the first day of strong riding, I was struck in the middle of the night with the multi-orifice jamboree.  Usually an affliction that follows heavy drinking or poorly cooked lomo saltado, I spent the whole night crawling from my tent to random sage bushes to expel the demons.  This rendered me useless and unable to ride the remaining 75 miles of the trip.  I spent day two bouncing terribly uncomfortable in the passenger seat of Farnham's Toyota Landcruiser.  Heated leather seats, dual climate control, XM satellite radio and Far's 2 year-old daughter vying for silence on my behalf, "Shhhh, Unkie g. sleeping!" couldn't soothe my aching insides.
But all bad things too shall pass...
The next couple weeks found my riding partner, Marc Thomas and I, riding and camping in Fruita and Grand Junction.  Marc has been an awesome source of encouragement as I try to find my way back to riding with confidence and skill.  Wanting so badly to be able to catch him on the trail and eventually be able to pass him, driving me to ride hard and train hard.
While I was laid up with the autumn crunk, Marc met some great ladies that live in Junction while he was riding in the Loma area near Fruita, Colorado.  These ladies, Leila and Andrea, agreed to show us around some of the locals' favorites outside of Grand Junction.  This riding turned out to be some of the best new terrain I've ridden, which meant a return visit the following weekend.  I spent the days following Thanksgiving in GJ, hosted by Leila and entertained by her awesome group of friends.
The mountain biking has been incredible and the weather, stubbornly refusing to turn into winter, perfectly suited an extended season.  It is an incredible feeling to be able to ride my bike rather aggressively already.  Even though it has been 5 months since getting rid of the crutches, caustic memories linger just beneath the adrenaline grin on my brain.
Posted by -g. at 7:07 PM