So my journey has been full on already.  Life has been just great and the weather even better.  I’ve only had a couple hang-ups with the bike.  I got a flat tire just outside of Mazatlan that left me driving quite fast and dangerously to meet the Keenans in Puerto Vallarta.  Murphy had other plans for me as I rallied to get there only to sit at the bar alone since Keenan and Karen had given up hope of my arrival, seeing as I was already hours late.  But we did have a fun when they showed up after all. 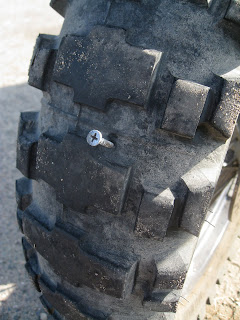 The day before my death rally, I rode from Los Mochis, Sinaloa to Mazatlan.  It was uneventful but pretty.  The landscape was flat along the coast with mountains visible in the distance.  There were crops of all types growing in the fields.  I was ripping down MEX200 Cuota, which is the toll highway.  I was managing about 75 miles per hour without a problem.  The pavement was great and the traffic was non-existent.  It was a holiday after all and most people were enjoying the beach or their families.  I had been warned that people might be out driving drunk, but since it was early afternoon, I can only assume that they were still getting drunk.

A few of the guys from the Murcielagos Motorcycle Club in Los Mochis took me to breakfast at the Country Club.  I pulled my fully loaded bike up next to the first tee and parked it there for the golfers to wonder at.  After breakfast my new friends wished me well and I was off for Mazatlan.  It was a pretty quick ride.  I think it took me around 4 hours to get there.  I pulled in an hour or so before sunset and picked around trying to find the hotel that I saw on another riders report on ADVrider.com.  La Siesta Hotel in old town Mazatlan.  I found it and found a sweet little quote by Jack Kerouac on the front wall beside the door.  Since Kerouac is probably my favorite writer of all time I found this a comforting omen. 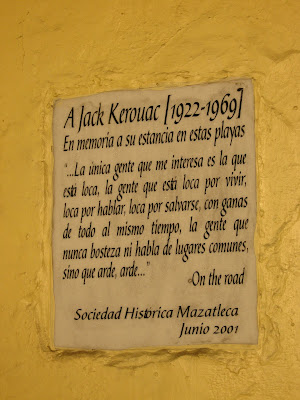 I checked in... gave the reception guy a little spiel about how I’m a journalist and managed to get an upgrade to a ocean view room. 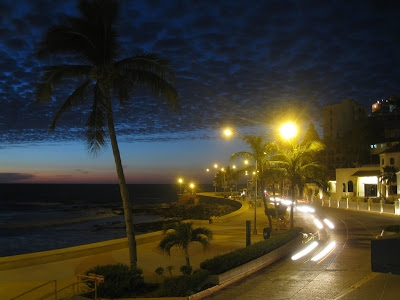 After making it from Mazatlan to Puerto Vallarta with only a flat slowing me down and finding the Keenans out for the evening.  I proceded to charge them up a big bar tab and do some journaling at the bar.  My journal entry from that night is quite amusing as I digressed profoundly the more I had to drink.  Pretty fun really.  So there I sat smoking cigars and drinking tequila and beer typing away on my mac, while still sitting in my stinking riding gear and motocross boots under the palm frond thatched roof over the bar.  I was obviously a sight to see, because everyone was checking me out. 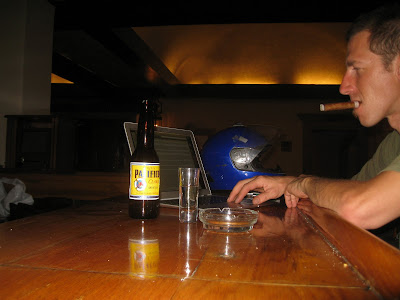 The next day we lounged around the pool until the Keenans needed to make their departure for Minnesota.  I loaded up the bike and split for Sayulita.  A little surf town about 25 km north of Puerto Vallarta.  It was a very cool scene there and I figured I’d easily get stuck their all winter.  But the company was good and I decided to stay for a few days.  This helped free me of some of my budget and starting to feel a little restless, I mounted up ‘Gigante’ as I’ve come to call my KTM, and proceded to immediately drop it in front of my new found friends from Avon, Colorado no less.  So I’m certainly assured that that story will not go untold back home. 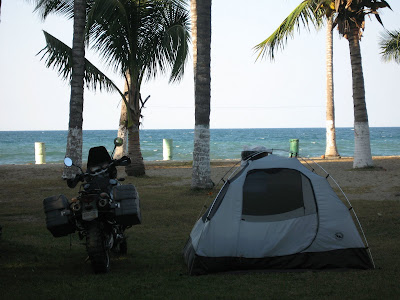 I headed towards Puerto Vallarta once again.  I immediately noticed that my speedometer had quit functioning.  I wasn’t sure if it was from the fall in Sayulita or what.  I pulled over to give it a quick inspection and cleaned off the magnet but still it didn’t work.  The sun was getting high and I didn’t want to hit the Honda shop during siesta, so I pulled out of Sayulita with only my guess as to my speed.  It didn’t really matter anyway.  ‘Gigante’ only has one speed... warp speed.

I found the problem with the speedometer upon closer inspection, while picking up a spare rear tube at Honda PV.  Seems that all the front suspension action had worn through the little speedo wire where it crosses my front fender.  The mechanic in the shop pointed me next door to an auto repair shop where a cool kid named Juan grabbed a soldering iron and a little piece of wire.  15 minutes later it was all fixed.  He told me I didn’t owe him anything, so I slipped him 50 pesos for some beer.  He was stoked, I was stoked, we were stoked.  Verb conjugations...  My spanish is getting better.  Far from fluent still but coming along.

I peeled off down the coast headed for a beach town called Maruata.  Two minutes out of Puerto Vallarta at 1 in the afternoon and I was pretty sure it was out of my reach.  The road pavement wasn’t as good as the highways had been and there wasn’t a single straight section of road for the first two hours.  Just winding and curving and rising and falling.  Such a great ride.  Most of the time the trees had just grown over the road creating a tunnel of jungle canopy stretching along the windy road, only occasionally giving me a shot of the ocean through a break in the trees.  The riding was spectacular but I wasn’t going very far very fast.

When I came to a little town called Cihuatlan, I pulled over at a tienda for some much needed liquid refreshment.  I chugged down some Gatorade from the pretty gal all dressed in KTM orange.  I couldn’t pass up on this opportunity so I invited her out for a picture alongside my massive moto.  She and the woman who ran the tienda said that I should stay in Cuyulán because once I crossed into Michoacan the roads would get far more difficult.

The rest of my ride that afternoon I mused about orange.  Si tomo la naranja, solo veo naranja.  This is a slant on the popular KTM saying...  “Once you drink the orange Kool-AId...”  Like all the major motocross manufacturers have their iconic color, orange is the color of KTM.  Though my bike is black, it does have really nice orange detailing.  Only fitting then to grab a photo of a Jaliscoan model dressed in orange right? 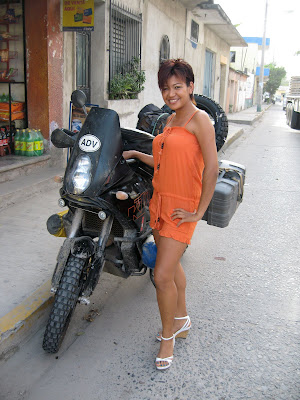 I stayed in Cuyutlán that night.  It was a little town geared towards Mexican tourists from Guadalajara.  The local people there seemed a few cans short of a six-pack.  I wasn’t sure if this was due to a lack of influx to the gene pool or the slow pace of their pacific existence.  Anyway, I crashed in my air-conditioned hotel room, with ‘Gigante’ parked securely in the locked courtyard.  I didn’t waste any time getting out of there in the morning though.  A guy like me could be a hot commodity in a town lacking influx to the gene pool.

I ripped down through a fairly large town called Teocoman and shortly after picking my way around to find the highway again, they typically just dead end right in the middle of the town and pick up again somewhere on the other side, I pulled up to a military checkpoint and was surprised to see a fully loaded KLR ahead of me with two riders on it.  I pulled up next to them to get their story.

“Justin!” the girl on the back exclaimed.  This kind of tripped me out.  I’ve been traveling alone since crossing from Baja, so it was weird when two people I’ve never seen in my life knew who I was.  Turns out they ran into Al on his trip northward in Baja and he told them to keep an eye out for me.  I thought we would ride together for a bit but it was immediately apparent that our speed of travel was significantly different.  I pulled to a stop at a roadside tienda and we chatted over some Gatorade.  She is from England, he is from Turkey and they are both long distance motorcyclists traveling the world.

I took a wrong turn during my twisty Michoacan bliss and managed to find myself 45 minutes into the beautiful mountainous countryside.  It was great riding and a great view but it took an hour and a half out of my day not to mention a bunch of gas.  Lucky for me I came across another little spot that I’d seen on Crashmaster’s ride report.  Rio Nexpa.  This little surf villiage is like what Sayulita must  have been like 20 years ago. 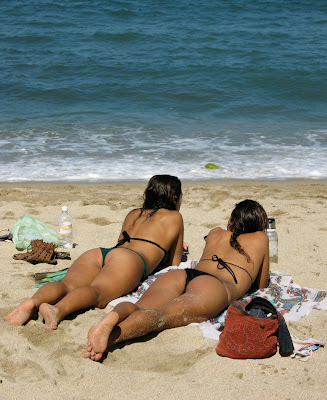 So I chilled here for a night making friends and wishing I could stay forever.  But pushing on is what I needed to do and I found my way to a government campground here in Ixtapa.  The day is pushing on already.  It’s already 10 and the sun is getting hot.  I’m going to try to post this and then add pics later.  The internet has been slow and hard to find in the places I’ve been staying.  But I may get a hotel in Acapulco or tomorrow night in Puerto Escondido.  I’m pushing towards Oaxaca to visit my cousin-in-law on his family farm.  Viva Mexico. 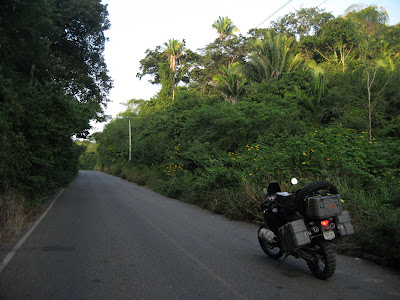 Do you have copy writer for so good articles? If so please give me contacts, because this really rocks! :)

Just want to say what a great blog you got here!
I've been around for quite a lot of time, but finally decided to show my appreciation of your work!

Thumbs up, and keep it going!

Just want to say what a great blog you got here!
I've been around for quite a lot of time, but finally decided to show my appreciation of your work!

Thumbs up, and keep it going!