A side trip into the Chiapas backcountry... 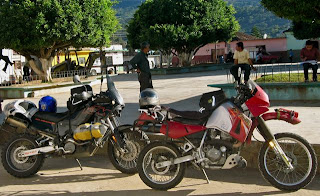 So Sam rolls into San Cristobal on a KLR the day after I got there.  We start chatting it up with Ben and Torben and soon enough we're all on our way out to dinner with a couple of Dutch gals from the hostel.  They are joking about how they won't have much to contribute to the conversation, since all of us moto-heads have been talking non-stop about our bikes, our various trips and experiences on the road.  For fun we try to get them to tell us how fun the bus rides are.  We quickly figure out that when they talk about the terrible winding road to Palenque, that it is bound to be heavenly for us.

Sam and I, while whittling away the evening on Facebook, decide to take a day trip the next day into the backcountry to explore around looking for some dirt to ride.  We know we are in Zapatista country but after reading about the Zapatista's cause... Essentially trying to protect indigenous land rights from Mexican and American corporate interests... we're pretty sure we won't have much trouble with them even if we do have a chance encounter.

We meant to go to Chamula to see some old church and local Mayan people but the riding together was so fun we ended up accidentally blowing by the turn-off for the town and just kept eating up the twisties.

The landscape was incredible.  We took the first turnoff that we saw and rode down the gravel road past colorfully dressed little ladies with herds of goats.  When we tried to photograph them, they hissed shaking their walking sticks at us.  What a bummer.  The photos would have been so stellar.  I'm not really sure why they don't want to be photographed but I'm sure the number of tourists coming through or some deep cultural reason must be the answer.  But when I pressed to see if anyone knew why, no one could give me a good answer, other than they probably don't want to be treated as rare specimens of antiquity. 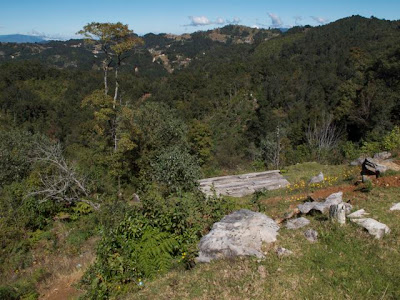 After sitting at the end of this dead-end gravel road a guy on a little moped ripped up honking his horn.  People emerged from the hills from every direction to buy his tamales.  When the locals dispersed, I asked if I could buy some as well.  Half expecting to be shunned, he actually agreed, gave me a good price of two pesos per tamale and shyly rode off after selling us his goods.

Sam and I stood stunned by the scenery and gobbled up the tasty tamales that had one little nugget of chicken in each tamale.

We decided to ride on following the little hand-drawn map he'd made in the hostal before we left.  We wound round and round until we found a little village with a church perched high on the hillside. 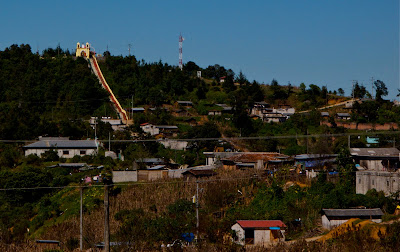 When we pulled up to the plaza, we found a festival going on but were immediately plagued by a local drunkard with a green card.  He wanted to speak to us in English but he was too wasted. So we worked with our broken Spanish but pretended not to understand what he wanted.  He wanted more to drink.  And us wealthy foreigners to be the purchasers of such drink.  I just kept explaining that I can't drink because I have to drive my moto.  Sam just smiled at him and shrugged his shoulders saying that he didn't understand.  We wanted to stick around and watch the festivities but this guy wouldn't leave us alone, so we donned the helmets and fired up the big bikes and rode on.

On the way in I'd stopped to photograph a little shrine on the hillside... While doing so I noticed this epic road winding across the a deep valley.  Sam saw it when I did, nodded and we were off looking for the turnoff for this route. 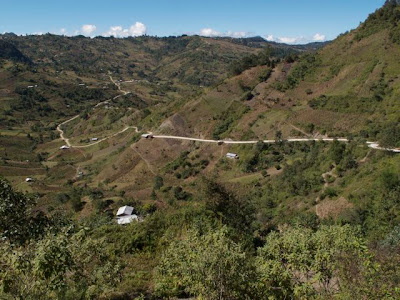 After picking around we found a super steep gravel road dropping down into the valley below.  There were no other vehicles moving around down there so we figured thumbs up.  I launched 'Gigante' out of a water ditch and caught some nice air.  It was really fun to be riding unloaded and able to ride like I was on a dirtbike again. 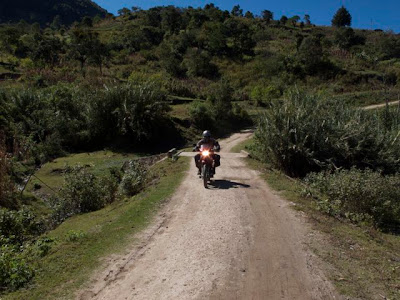 The smile on Sam's face as he rode by me indicated he was having a blast as well.  As we rode through, we passed more goat herders as well as little ladies weaving on looms tied to trees in their yards.  We were really gunshy to take any photos because of the reprimanding we'd gotten earlier in the day.  So we just took photos of each other ripping.

When we got to the bottom of the valley and crossed to make the climb on the other side, we were surprised to find a concrete roadway climbing incredibly steep inclines.  This concrete was perfectly smooth with consistent expansion joints cut into it.  It was super grippy and super smooth.  So...  We rallied up it at full speed filling the peaceful valley with the sound of two high-performance machines gasping for air and firing all cylinders in check.  Amazingly huge drop-offs were constant on our right as we blasted upward toward the sky at the pass. 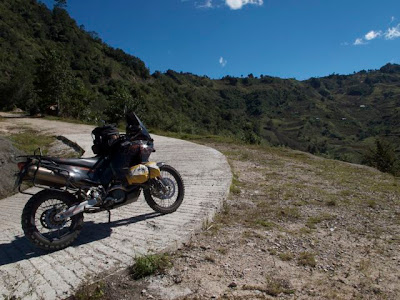 Not surprisingly we were only at the pass for about five minutes before a guy dressed nicely albeit conservatively, holding a two-way radio approached us.  He explained that this is the land of a traditional Mayan community and that typically outsiders were not allowed to pass through.  He indicated that we would be allowed to continue on however the speed limit in the whole valley was 20 km/hour.  I laughed to myself when he said this thinking that 'Gigante' doesn't even idle that slow in first gear.  He also mentioned that we'd far exceeded the speed limit since we'd entered the valley.  He wriggled the two-way radio, indicating that unseen eyes had been observing our antics since we'd turned off the pavement and entered their territory.

I asked him if we were going to be fined or if we were in any kind of trouble.  He smiled a sly smile, took his time answering and said that, no we weren't in trouble but we would need to proceed at 20 km/h to the nearest exit onto the paved highway.  He said he hoped we enjoyed our little journey and that they were happy to have us.  I'm pretty sure, even though my Spanish comprehension isn't perfect, that he was speaking with heavy sarcasm.

We followed his orders and made for the road.  But we didn't get out before encountering more radio wielding henchmen.  The next guy wasn't so professional and tried to give us the shake down.  He just wanted enough money to buy himself a soda.  I looked around and slyly said that I'd love to have a drink with him but as there were many people observing us and I clearly didn't have enough money to buy everyone a drink, it wouldn't really be fair to just buy him one.  As a community that believes deeply in collectivism, he nodded in agreement and let us pass.  When we got out on the pavement we stopped and had a beer and chatted excitedly about the little adventure we just had.

I was close to ready to ride back to San Cris but Sam was hell bent on finding a loop he'd seen in the guidebook.  It took us several hours into the afternoon to realize that the road shown on the guide book either didn't exist, or it was behind the fences of one of the many autonomous Zapatista communities that we passed.

The landscape and the riding were absolutely incredible.  We came across a really cool statue in the middle of nowhere and pulled into the rain ditch to pop some photos of it. 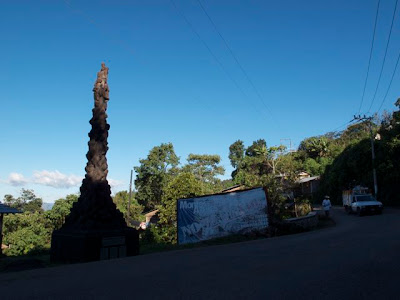 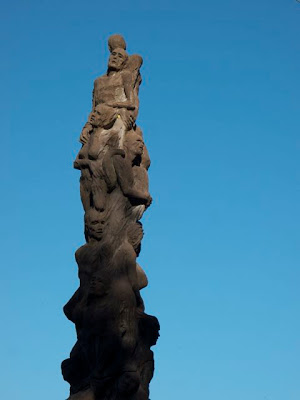 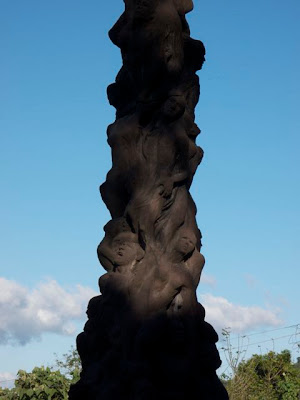 It was creepy yet fascinating at the same time.  We got passed by a crazy fast hiking traditional Mayan dude in a white tunic with a belt.  (If you look closely in the first picture with the statue you can see him.) Hoofing it along in his sandals.  He waved a quick "Buen Dia" and continued on his way.  We ripped on deeper into the jungle until we got into a town that was building themselves a new church.  We found out that we were at the end of the road.  It was time to turn around and race back the way we'd came.  No loop today.  We hammered non-stop back to San Cris and made it in just as the sun was setting behind the mountains. 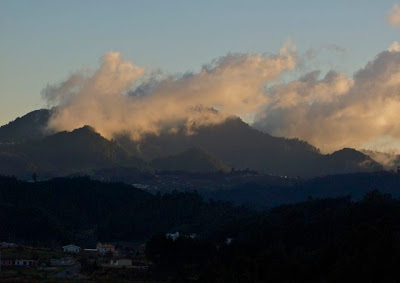 We got to the hostal, parked the bikes, walked straight to the Taco stand and cleaned up ten tacos apiece talking excitedly of our day.  We started drinking beer and the chatter of the ride carried on until midnight or so.  The day had convinced Sam that he should join Ben and I the next few days into the jungle to check out some ruins deeper in Chiapas before he peeled off for Guatemala. 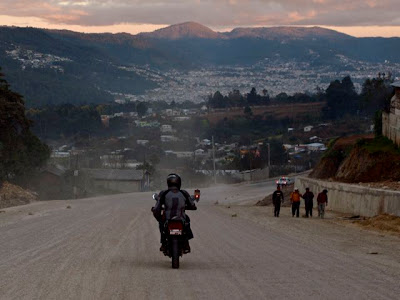