A week in the Oaxacan Highlands... 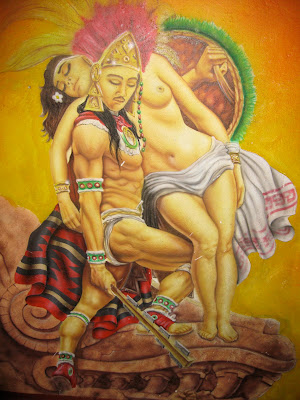 It was with a heavy heart and teary eyes that I pulled away from the Hernandez farm headed for Oaxaca City today.  In six short days I’d grown quite an attachment to the whole family in Santa Cruz Nexila again.  I’m sure that I could have spent my whole winter there living that rural subsistence lifestyle.  Homemade food made fresh daily over open fire.  A slow constant buzz of activity with always a task waiting to be finished.  But my journey must continue... 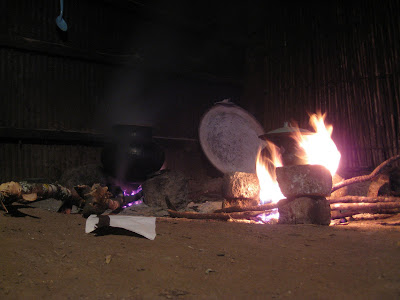 After my run-in with the Gestapo in Acapulco, I was really looking forward to getting to my cousin-in-laws farm.  I bid a quick ‘see you later’ to my new moto friend Ben in Puerto Escondido. (He was nice enough to follow me to the ATM to make sure I could withdraw some more money to make it up into the mountains.)  He told me to take it easy riding into the hills.  He warned that the roads quickly deteriorate and that the potholes could catch a guy off-guard.  He also clued me in that within 50 miles I’d be close to 6000 feet above sea-level.  This was welcome news as I knew that with the elevation gain would come a temperature drop.  I was growing weary in the sweaty humid heat of the coast, so some cooler weather riding was comforting news. 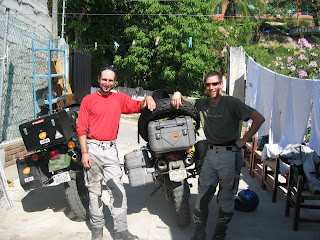 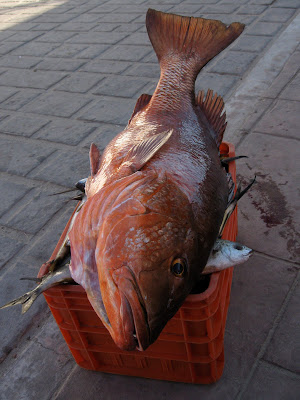 It was Thanksgiving Day after all, and with much to be thankful for I gassed it into the hills.  The constant curves and astonishing scenery pushed the thoughts of the Policia far from my mind.  I took in the everchanging beauty with every turn, loving the coolness that came on the higher I rode.  The trees became taller.  The vegetation more varied.  At one point corn grew alongside banana trees and jungle like vines draped down to the meadow grasses as I passed from the coastal ecology to the mountain zone.  The road did in fact get worse.  Dodging potholes added a whole new effect to the constant switchbacking up the mountainside.  My very own video game.  A KTM version of Frogger.  ‘Gigante’ was loving it as much as I was and we rallied on up into the mountains.  Our sybiotic relationship growing stronger with every mile. 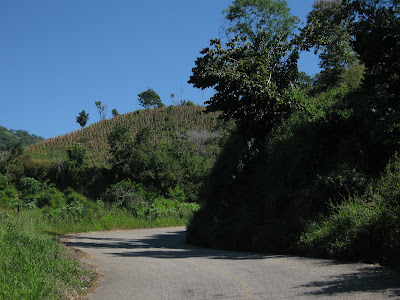 I passed local machete toting farmers hoofing it along the roadside and played leapfrog with the other automobiles on the same trek.  At the pass, I stopped to take in the vista and breathe the fresh air for a moment while munching on freshly roasted peanuts I’d picked up from a roadside stand.  And along came Bob.  I saw him before he saw me.  He’d come thumping around the corner on a totally customized Buell 1200, black with bright yellow boxes mounted up.  He pulled to a stop about a hundred yards uphill from me to take a picture of the awesome valley below us.  I waved him down when he finally saw me on the next switchback. 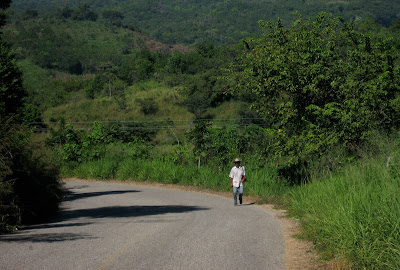 Bob is on his way home north to Washington on a great journey from South America, where he’d shipped his bike months ago.  Funny thing was... he was heading south.  Even funnier, I was heading north.  Each of us heading in the wrong direction from our destinations, we were equally thrilled with this road.  We shared some enthusiasm, he shared some information from Central America and then in an act of great generousity, he gave me his maps for Belize, Guatemala, Panama and Colombia along with a couple of hostels to look for along the way.  We chatted for a half hour or so, took a couple of pictures of each other for memory sake and each peeled off getting further from our destinations yet somehow closer to the goal. 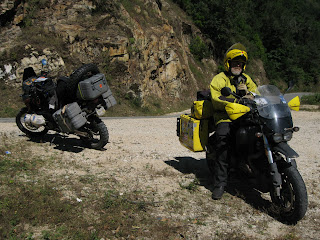 I was really stoked to be out riding.  The weather was great.  The conditions were great and the scenery unbelievable.  When I peaked over the pass, I came to a military checkpoint.  The typical verbal exchange was had and I was waved off on my way.  It wasn’t until I’d ridden away that I realized that I’d misunderstood the soldiers question and had told him I was from Argentina.  I guess those details didn’t matter, or he understood what I was trying to say anyway.  He warned me of the hundreds of cyclists and walkers who were on an annual pilgrimage to the shrine of the Virgin of Juquila. 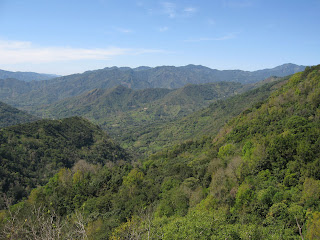 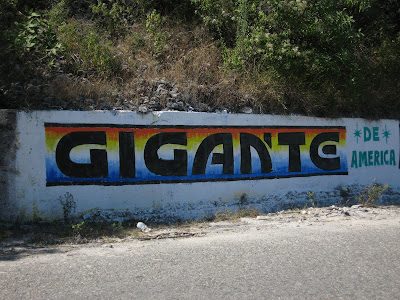 A few short hours later and I was pulling up to the homestead in Santa Cruz Nexila.  I had butterflies in my belly as I made the final turns into the valley I recognized from my visit last December.  When I pulled up to the gate, I was surprised to see a new house in the process of being built behind the bamboo and tin-roofed structures I was expecting.  Maria was up on the rooftop spreading out pumpkin seeds to dry and Carlos and the two youngest girls were there too.  They opened the corrugated tin gate and waved me excitedly into the yard.  I revved ‘Gigante’ up the rocky slope and pulled to a stop in the middle of all the barking dogs. 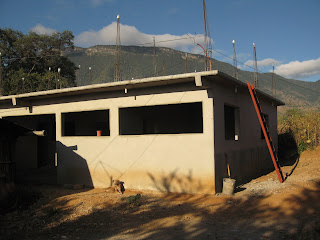 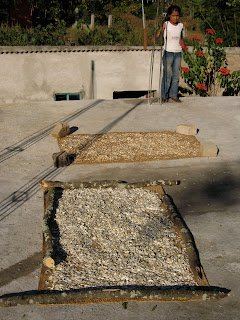 I wasn’t even off the bike yet and I was getting hugs from Maria and the girls.  Carlos came up and was studying ‘Gigante’ thoroughly.  We exchanged greetings and they told me that Justino was out in the fields with the animals.  Carlos helped me unload my bike before taking a walk through town with me.  We caught up as best we could, he talking slowly and me doing my best to understand and communicate in return.  We managed quite well really.

Justino was stoked when he walked through the gate and saw me there hanging out with the kids.  He looked the part with his straw hat and deeply browned skin, machete in hand.  We talked for awhile and then called home to my mom’s place where we knew everyone would be together for Thanksgiving Dinner.  We chatted with them and then retired to the cookhouse for some dinner of our own.  Tasty fresh corn tortillas with a black bean stew unique to this region, lightly flavored with local Oaxacan chocolate used to make mole.  I instantly remembered how much I love Maria’s cooking. 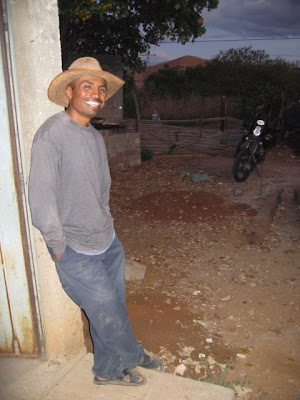 A couple of days here and I’d forgotten my woes of tourist town struggle and the race down the coast to get here.  Everything slowed way down.  I was fortunate to get to spend a lot of time with all the family members.  The town of San Andreas Zabache was having their annual Fiesta, so several nights we taxied down the 5 kilometers to drink beer in the streets, dance and watch traditional Mexican Rodeo bull riding. 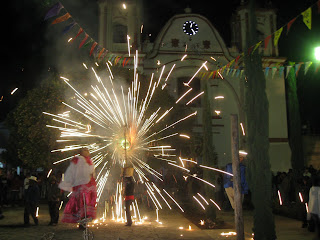 When I found myself extremely hung over wishing that I could just die until the devils went away, Cayetano showed up outside my tent with a special tea.  His wise old eyes, weathered hands outstretched grasping the steaming cup, seemed to tell all.  It was our first individual encounter in both of my visits here.  A shy old man in his early sixties, we’d finally found common ground in a hangover.  Cayetano, Justino’s father, is no stranger to the Mezcal, which when consumed pure as they do in the fields must create a crushing hangover.  I could see in his eyes that he understood my pain.  He handed me the tea and told me it was called “Te de Borrachos” or “Tea of the Drunks” made of a herb of the same name.  It was bitter and astringent and sure as shit, my headache and stomach ache were gone in a half hour.  I was out of the tent and in the afternoon sunshine.  He walked around the corner and gave me a knowing smile with his hand tipped to his hat in a half wave half salute that is his customary salutation.

I bet in the 10 or so days that I’ve been around him we’ve exchanged less than 50 words.  I realized this day, that it is just his shy quiet nature, and not a dislike for me the foreigner visiting his humble home.  There was a deep comforting glow to his eyes that until that morning I’d never seen from under his straw sombrero.  Maria his second wife shared that same comforting warmth along with a lack of much conversation.  Mostly I’m sure this is due to my crappy spanish but also since spanish is a second language for them as well.  They speak in a heavy slang dialect of their area.  With each other they use their mother tongue of Zapoteco, a ancient indigenous language descended from pre-conquistador times.  Much of their lifestyle aside from the electricity, water spigot in the yard and other various modernities is the same as the old days. 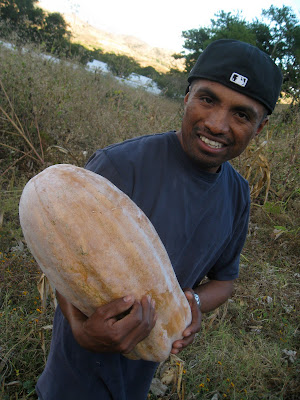 I spent several hours with Maria, mostly in silence husking corn and removing the dried kernels from the cobs to be ground down into masa for tortillas and tamales.  Watching her make mole from scratch on a stone grinding table with a stone grinding pin, I realized that times have changed but very slowly here in the hills tucked away south of Oaxaca City.  It is a true treat to witness this lifestyle and to have this connection to this wonderful family.  It is one thing to do a traditional homestay on a farm in a foreign country.  Another thing entirely to do a homestay with a family that is connected to mine through marriage.  It is this connection, and their unending hospitality that makes it so hard to leave them.  And so it truly was with heavy heart and teary eyes that I rode away from the farm this morning.  A truer connection to real rural Mexico isn’t to be found anywhere for me. 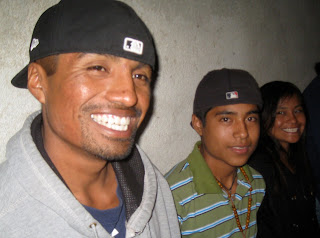 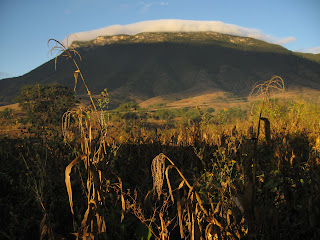 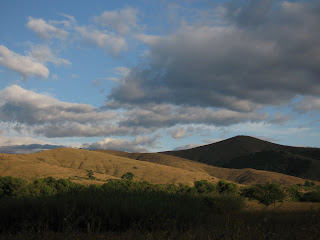 I got that same great picture of the mural. Wonderful!

Hey G, why does Bob have about half the amount of shit on his bike that you do on yours?

Glad your having fun bro, this weekend Jonny Love called me and I had just finished getting rubbed down in a Turkish bathhouse by a fat naked man named Mustafa. He had a good laugh about that one. Quite the life we lead, can't wait to hear the next post.