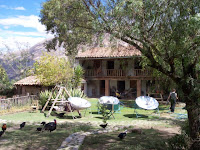 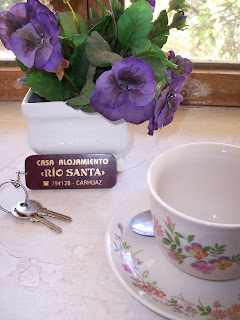 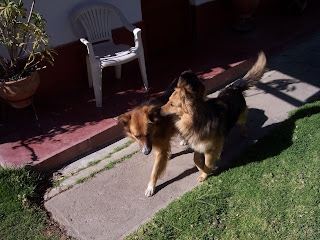 Wow! First off, if anyone can help me get rid of this cold, I´m down. I´ve been into the pharmacy... my spanish isn´t good enough to explain what is going on, so I busted out some toilet paper and blew my nose in it and showed the pharmacist. She nodded and gave me some pills. I bought them and tried them but really no help. So I´ve just been suffering through it and hoping that it gets better.

So yesterday my travel partner, Jonathan, left for a trek in the Cordiellera Blanca known as the Santa Cruz trek. So I decided to head up to Carhuaz. I had met a young lady named Alina in Lima and she is on a course there. So I only knew that she would be in the market in the morning. Well I packed my things and found a taxi for 25 soles. My driver, German, was pretty awesome. We put in my Black Eyed Peas cd and rocked out for the 35 minute drive. He was really interested in coming to the U.S. so I gave him my email and told him to look me up. They all are interested in coming to the states so it won´t surprise me if I don´t hear from him. These solo taxi missions are wonderful for practicing spanish. Stuck in a car with no one else, just gotta try... So he was amazed that I was going to Carhuaz to meet someone without a plan for meeting. I told him that I believed it would work out fine. I mean how hard can it be to find a bunch of gringo students in a local market... So literally two minutes out of the cab I bumped into her next to a Quechua lady selling a little bit of anything and everything.

Soon I was being introduced to everyone on the course, mostly females, darn. Then with a little help from Alina, I was invited to visit the ranch they are staying on and sit in on a lecture on Peruvian Agronomy. The ranch, known as Casa de Pocha, is situated above Carhuaz. It is a really unique demonstration of eco-sustainability. In the yard are alumnium solar stoves that look like shiny satellite dishes, that can be focused towards the sun. I´m told that they are very efficient means of creating heat. There is also a organic sewage treatment system that uses a type of lily to break down human waste. Ducks, turkeys, chickens, a couple of cows, a bull and a horse could all be seen in the yard. The three level building that we had class in was hand built out of mud-bricks and then plastered. The top level was a beautiful yoga studio with hardwood floors and windows all around, that gave a tremendous view of the snowcapped mountains.

Alina took me down to town for dinner, which was an experience. She is vegetarian but needed to eat chicken as there were no other options at the only open restaurant in town. But things didn´t get really interesting until later when we tried to find me a hostel. There were a couple hostels in town, neither too appealing, and I couldn´t find the one I´d read about earlier. Pocha had suggested a hospedaje, which is usually someone´s house that rooms and beds are rented out in. Well we went and visited this old lady and I was a little uneasy at first. It really was a proper hostel but as there was no advertising on the outside of the building she must get all her business through word of mouth. After looking at the room available, which was o.k., I told her I would like to check the other hostels and would come back. She said she´d be back at 8.

After checking a place around the corner which had zero character and 8 beds jammed in one room for the same price and Grandma´s for my own room and bathroom, I decided that Grandma´s place was exquisite. So we returned at eight... Her dogs, two mini-collies, probably the most well kept dogs in all of Peru, had followed us to dinner, to the other hostel and were still with us as we knocked on the door repeatedly. Alina and I joked that these dogs were her marketing scheme. The dogs would follow and eventually one would end up back at her hostel with the dogs. I had no idea how true it would be.

So after a half hour of knocking and waiting, I took Alina to get a taxi back to the ranch before it was too late. The dogs followed us to the plaza. I bid farewell to Alina and headed back to the old granny´s hostel. The funny thing was that I stand out wherever I go. Tall, white guy, baseball cap, backpack, etc. I just don´t blend in with the locals. I could wear the same stuff they are wearing and my height, which isn´t all that tall at 5´11", just sets me apart from the short peruvians. So not only do I stand out but now I´m walking around town and these two collies are right on my heels. The locals couldn´t figure me out. I was definately a traveler, but who has two dogs with them travelling a foreign country? It was awesome. I was sitting on the curb outside her hostel unable to get a response knocking on the door but the dogs were just chilling with me. Everyone who walked by the lonely street steered clear of me crossing to the other side of the road not knowing what to think about the crazy gringo with the two most well behaved and well groomed dogs in the country.

Finally around 10 p.m. a local guy said in spanish that I barely understood that she was hard of hearing and I needed to knock very loud. Sure enough, she came to the door stunned at the sight of me and her dogs wanting in. In the two hours that I waited I felt more local than I´ve ever felt in Peru. I wandered into another hostel to get a room because I thought for sure she wasn´t coming home... the guy looked at me and then the dogs... he wouldn´t believe me that they weren´t my dogs, so he wouldn´t rent me a room, thinking I´d sneak the dogs in later. I loved it. These two cute collies became my best friends and I miss them already. After Grandma let me into my room and went back to her television the dogs came ripping around the corner and hung out with me in the moonlight while I journaled for a while in the beautiful garden of Casa de Alojamiente. It could be the cold kicking my ass but I´m getting teary-eyed just thinking of having left my canine companions behind.

The bed was crap and I slept terribly but the story was so good that I wouldn´t have traded a good night´s sleep ever. I guess this is what travelling is all about... being uncomfortable, in a foreign place not knowing what is around the next bend, but trusting intuition to guide you to the right experiences.

The dogs woke me up scratching at my door. Grandma followed shortly with cup of steaming tea. I could have stayed there forever. But since I´m travelling, I needed to move on for more experience. I had a cup of coca tea just to get change for my large bills, had a crippled man polish my horribly cracking hiking boots, while I thanked the gods that I´m able to walk again, and jumped into a little combi van with twenty peruvians and sat cramped all the way back to Huaraz thinking here is Peru... Money creates comfort but always removes you from the real experience... Peru Real.

you my friend are walking and thank the gods because your adventure will only deepen as the days go by. there will be more grandma's and canine companions ahead. keep your eyes open and your camera handy because I need you to tell me a story with photographs. show me the people of Peru.

much love (and tons of envy)
kg.

yeah kg... i'm in it right now. living and loving and mostly through the lens. big john lent me his whole digi slr setup and i've been jamming. gonna get flickr or something similar but for now i'm just dropping a photo or two at a time here. internet hookup has been good but not great. glad you are along and keep the critique coming. i love it.
love ya,
g.

Claim FREE satoshis at Easy Bitcoin. Up to 33 satoshis every 10 minutes.