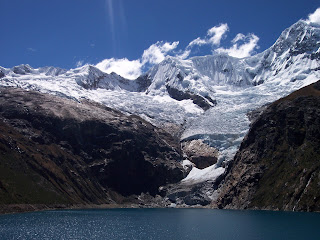 Last night, just before sunset we got back from our mini-trek to Lago Rajucolta. I was absolutely exhausted.

We took a taxi from Huaraz about two hours drive up into the valley of Rajucolta. We passed only one town in this valley: Macashca. However there were many settlements along the way that have names on the map. They didn´t really look like more than a couple of houses though. When we reached the border of Parque Nacional Huascaran, we got out of the taxi and shouldered our heavy packs. I´m guessing with camera bag and my backpack, I was carrying somewhere in the realm of 40 pounds. We hiked up this fabulous valley that was fairly flat. A river ran down the valley meandering from one side to the other. The entire valley was filled with cattle, mostly bulls. They looked really healthy and for the most part were very chill. I did photograph one at very close proximity. When the flash went off, he snorted and stomped his foot. That was the last time I used a flash taking a pic of a bull at close range.

The rest of the hike was awesome. We essentially just kept walking towards Mt. Huantsan, which just kept getting bigger and bigger. In my mind I imagined photographing the lake with the mountain´s reflection and the mountain in the background. About half way to the lake, I realised this would never work because we were way too close to the mountain. I´d be lucky to get the lake or the mountain but not both. This was tremendous as the mountain felt like it could topple over on us at anytime. After 2.5 hours of hiking, we arrived at the lake. The manager of the dam there came out to greet us and take our names, since so few tourists come up this valley. This was the first person we had seen since leaving the taxi.

We set up a little camp on the edge of the dam on the only flat spot we could find. This appeared to be a good place to sleep and the dam worker agreed that he would look the other way as people were not supposed to camp at the dam. After quickly setting up the tent, which I would not end up sleeping in... We set out around the lake to a sandy spot created by the lake´s level being lower now. I quickly began shooting like crazy as the light was turning from day to alpenglow evening.

Jonathan and I built up a little windblock for the gas stove and a rock campfire ring. I started collecting wood and got a fire going. We sat around this makeshift campspot and ate soup and sandwiches and drank tea, watching the mountain change colors. We talked about travelling, how great it was to be here away from other tourists, and where else we´d each been. The moon finally rose from behind the mountain very late, maybe after midnight. We headed back to the tent and got ready to go to sleep. I couldn´t resist the temptation to sleep outside so that I could watch the moon and stars. I didn´t really sleep much at all. The mountain was just fascinating. With a crack and rumble like thunder, the glacier would send thousands of pounds of ice avalanching down the face. It was truly amazing.

Around 4 a.m., I awoke, my sleeping bag covered with ice and frost. It was cold. The moon was much further into the west and was lighting the peak in a most glorious glow. Orion, one of my favorite constellations was situated just above the peak. I hesitantly got out of my ice-caked sleeping bag, got dressed and started shooting in the moonlight. The shots were superb. The glacier continued to calve and the light turned from pale midnight blue to robin´s egg to some pastel signaling the sun had risen above the horizon but would be hours before it rose over the peak. I climbed back into my down icicle and dozed off. When I awoke it was noon and my face was already feeling sunburned. We lazily packed our gear and headed back down the valley. Our taxi driver showed up twenty minutes past our agreed time, well within reason, and took us back down this forgotten canyon to Huaraz.

Today, I have been recuperating in Olaza´s Bed and Breakfast, where we have been staying. Seems sleeping outside of the tent, totally beat from the hike, has given my body the chance to catch an unwanted cold. I´ve got plenty of snotbox going on. So I´m now struggling with vitamins and water trying to ditch this sickness before the rest of my trip.

My hip is holding up well, after all that heavy hiking. My muscles are sore everywhere but I don´t have any deep pain. I don´t think I´ll be backpacking much more on this trip though. Still a bit too soon for my body. Tomorrow I´m looking at renting a motorcycle and heading to a nearby town, Carhuaz, for the weekly market. This should bring many photo opportunities and colors galore. I´m also hoping to meet up with a gal that I met in Lima. She is a medical student doing a field study in a little village about a half-hour walk from Carhuaz.

I hope you are all well. It is crazy to see photos of 35W online here. I hope all of you are safe and sound and no relatives have been involved. Much love from Peru, -g.
Posted by -g. at 2:10 PM

G-
Ain't Huaraz grand? Look up my friends Ted and Jen at the Skyline Mountaineering School if you get a chance. Oh, and definately check out the Thai restaurant in town. I don't think I knew you were going to Huraraz???? Have fun bro.

And go to the bar where the guy infuses pisco with cocoa leaves. Tim, what's the name? So excited for you on your adventure!!
love,
Erin

yeah huaraz is so rad. the thai restaurant rocks! i'm heading for some soup now. i'd look up your friends but i'm beat down with this cold for the moment. but i'm coming back here really soon. i love this place.

Bones, you need to teach me big mountaineering... these mountains are so inspiring!

how many days til Ecuador?

thanks for turning me on to blogger! this is really fun.

see you soon!
MOVE Safely. Isn't that cool. You are MOVING to Ecuador, not going on a trip. I'm so envious. I'll see you there as soon as I can though.